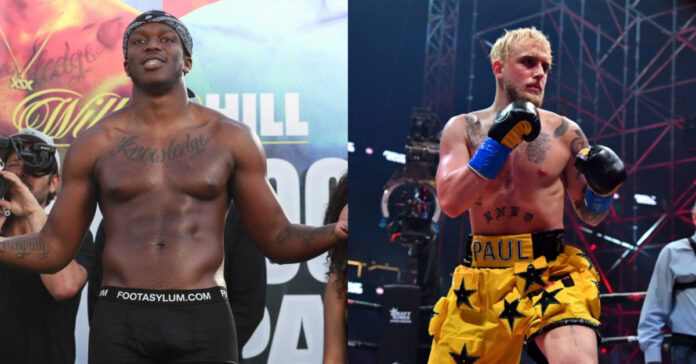 KSI will make his boxing return later this evening when he faces rapper Swarmz in the opening matchup of the event before closing out the card against professional boxer Luis Alcarez Pineda. KSI was originally set to face fellow YouTuber Alex Wassabi, but he had to withdraw from the bout due to suffering a concussion.

Despite having two opponents to overcome later this evening, if successful the YouTube star has welcomed the opportunity to face fellow social media personality Jake Paul who has amassed an undefeated 5-0 record since entering the world of boxing.

Taking to social media KSI responded to critics who claimed Jake Paul would beat him if the two were to ever match up.

“Crying from outside of the club 😂😂. Jake Paul and you can get it soon.“

KSI’s only professional bout came against the brother of Jake Paul, Logan, who he was able to beat via split-decision back in 2019. Since this bout, the pair have put their differences aside to work together on a business venture known as ‘Prime’, a sports hydration drink.

Whilst he was able to reconcile with one Paul, that seems unlikely with the other as he and Jake often exchange blows on Twitter.

Jake Paul was supposed to compete earlier this month but saw his initial opponent Tommy Fury withdraw due to travel issues only for the replacement opponent Hasim Rahman Jr also have to miss out on the opportunity due to not being granted permission to compete by the athletic commission where the event was being held.

In his most recent outing, Paul stopped former UFC welterweight champion, Tyron Woodley, inside the distance, having gone to a decision against ‘The Chosen One just four months prior to the rematch.

You can catch all the action over at DAZN pay-per-view. If you are not subscribed to DAZN it will cost £19.98, however, if you are already a subscriber to the streaming site, you can purchase the fight for £11.99.

Will you be tuning in to watch KSI’s return to boxing?