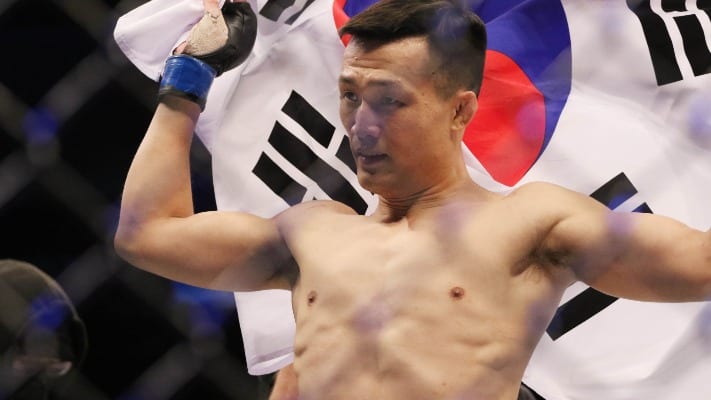 Add the Korean Zombie to the list of people who disagreed with Alexander Volkanovski being the winner against Max Holloway.

Volkanovski retained his featherweight title after a closely-fought rematch with Holloway in the UFC 251 co-main event last night. “The Great” faced early adversity as he was dropped twice by Holloway in the opening two rounds.

While the Aussie did turn things around in the final three stanzas, many felt Holloway did enough to regain the title. In the end, Volkanovski surprisingly earned the split decision verdict to keep his strap.

Zombie: No Judges Needed For My Fight

And the Korean Zombie was not impressed as he took to social media on Sunday.

“I am responding to yesterday’s title match against Volkanovski and Holloway,” Zombie wrote on Instagram. “To be honest, it is shameful that Volkanovski is a champion of my weight class.

“Give him to me then you don’t need to worry about the judges decision. As you know, I won’t let the judges decide the result of my fight. I will finish him at the title match and that is what UFC fans want to watch.”

It would appear that if anyone is next for Volkanovski, it is Zombie who has won three of his last four outings all by way of knockout. He most recently knocked out Frankie Edgar in the UFC Busan headliner in December.

The former title challenger has called out Volkanovski repeatedly in the past and going by this latest social media post, it would certainly be heated affair.

Who do you have winning in this potential next title fight?