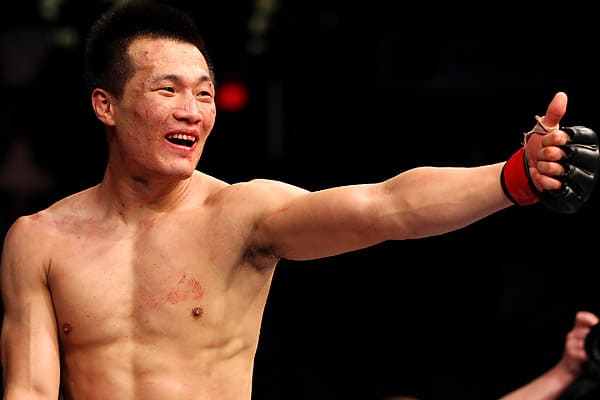 Chan Sung Jung who is otherwise known as ‘The Korean Zombie’ has fired back at his bitter rival Brian Ortega who accused him of ducking their eagerly anticipated fight.

The two featherweight contenders were supposed to face off at UFC Busan in December 2019. Unfortunately, Ortega suffered a torn ACL and was forced out of the fight. Former lightweight champion Frankie Edgar replaced him. On fight night it was Jung who emerged victorious, stopping Edgar inside one round.

Since then ‘Korean Zombie’ and Ortega have become embroiled in a bitter feud that reached boiling point when ‘T-City’ slapped the musician friend to Jung, Jay Park at UFC 248.

“Ortega and The Korean Zombie are gonna fight. You know how I just went out and said (about the Tony) Ferguson fight against (Justin) Gaethje, I said ‘I absolutely, positively guarantee you that this fight will be great. That’s the same thing with Brian Ortega vs. The Korean Zombie, there’s no way this fight is boring. And the guy that comes out of that fight would be next in line for a title shot.” (Transcribed by MMA Fighting)

Those negotiations appear to have come to a standstill, something Ortega is not too happy with. The 29-year-old recently took to social media to tell Jung to hurry up and sign the contract, he wrote.

“Someone tell Korean zombie sign the contract. You been asked multiple times already. Give the fans what they want to see and quit stalling.

Jung responded via Instagram to his rival’s accusation, he wrote.

“I am sure you are aware why I can’t go to the states at this time. If you would come to Korea, I am ready even in July. Otherwise, stay calm waiting for me. #seeyousoon”

Who do you think wins when ‘Korean Zombie’ and Brian Ortega finally fight?