LowKickMMA.com
Home UFC News Khamzat Chimaev Welcomes Conor McGregor To Train with Him Even If He... 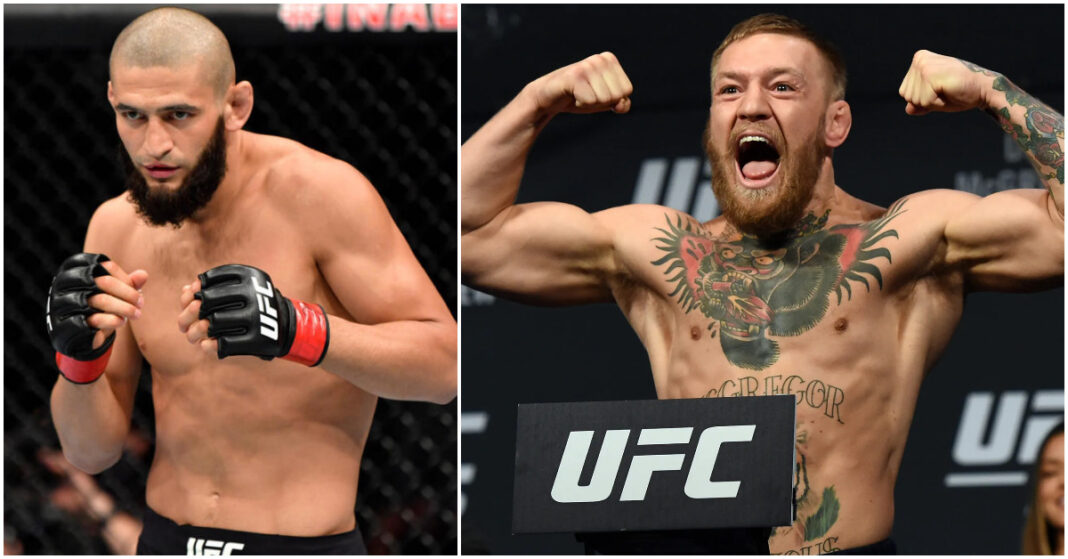 Khamzat Chimaev looks to have accepted the possibility of Conor McGregor getting a welterweight title shot against Kamaru Usman ahead of him.

‘Borz’ extended his offer of training together to McGregor ahead of his return to the octagon. In a recent interview with The Mac Life, the ‘Mystic Mac’ shared his thoughts on potential opponents for his comeback. Amongst the likes of Dustin Poirier, Nate Diaz, current lightweight champion Charles Oliveira, McGregor expressed his interest in getting the welterweight strap by knocking out current champion Kamaru Usman.

Dana White had confirmed Chimaev’s upcoming bout with Gilbert Burns to be the #1 contender fight. However, Chimaev understands that it’s a business first and given the appeal of the two fighters, it would interest UFC to give the title shot to McGregor before him.

In a video shared to his YouTube, the Russian-born Swede said, “If he [McGregor] wanna be back, if he need some help then, we’re here. If he wanna fight Usman, I think it maybe can happen because the guy is so famous. They can make money, good money, both. That’s why if they wanna fight, both, I think the UFC wanna make it.”

“When I finish Gilbert Burns, I think I am the next for title. But this is the business. Whose the famous, makes more money, they choose them. I understand that. But we’ll see what’s gonna happen. If he wanna come and train with us, he [is] welcome,” added Chimaev. (h/t Sportskeeda)

What’s next for the UFC welterweight division?

Khamzat Chimaev recently welcomed UFC middleweight contender Darren Till to train with him at the Allstar Training Center in Stockholm, Sweden. The pair have been working together for the past few weeks to help Chimaev get ready for his upcoming bout with Gilbert Burns at UFC 273 on April 9.

With the top contender, Colby Covington out of the picture for the near future, the future of the welterweight division in the UFC is up in the air with a bunch of ways to go ahead. Reigning champion Usman is set to face Leon Edwards in his next title defense and if he’s able to successfully retain it, he will have options ahead.

Conor McGregor might just swoop back in and get the big money fight that Usman will want at welterweight, or we can see a possible match up between Khamzat Chimaev and Kamaru Usman next given Chimaev dispatches Burns first.

Do you think Kamaru Usman should fight Khamzat Chimaev or Conor McGregor after Edwards?