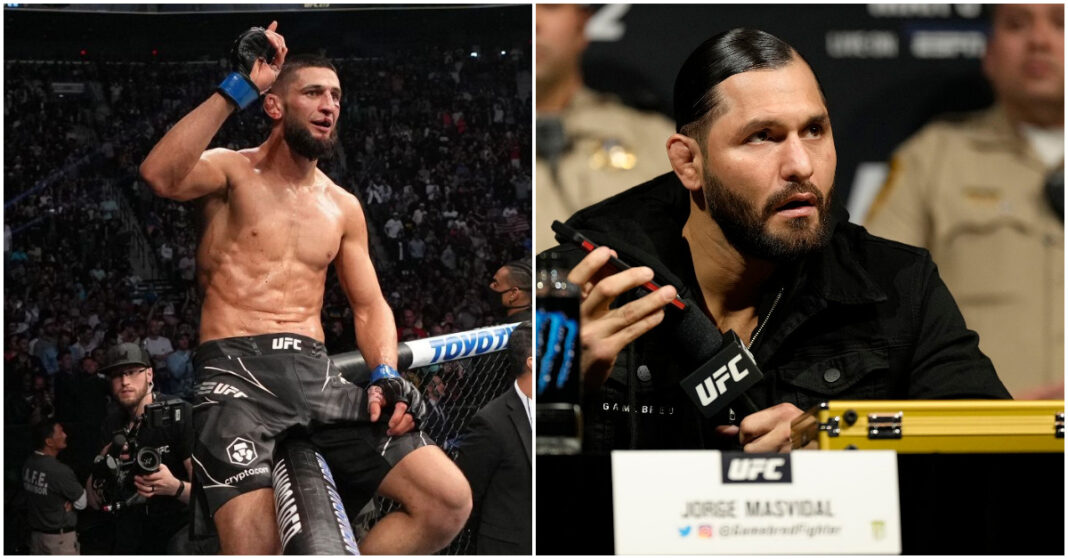 Khamzat Chimaev has fired back at Jorge Masvidal for his criticism of the rising prospect.

UFC rising prospect Khamzat Chimaev has put on incredible performances in his UFC career so far. ‘Borz’ took on the formerly second-ranked contender Gilbert Burns in what was his toughest challenge to date. In what will go down as a fight of the year nominee, Chimaev managed to snatch a unanimous decision win.

Jorge Masvidal is not on the hype train

The hype train of Chimaev continued stronger with his last win coming against an elite fighter in Burns. Many fans believe him to be the next big thing in the sport and already see him as a soon-to-be world champion.

One man who isn’t convinced of the Chechen is Jorge Masvidal. In an appearance on Logan Paul’s Impaulsive podcast, ‘Gamebred’ was asked to share his thoughts on Chimaev and whether he believed him to be beatable.

“I don’t think s**t of him. He hasn’t fought anybody, you know. He’s gotta go fight some guys first. They (the UFC) talk big about everybody they think they can get money from. He can bring in those Arabic countries that got a lot of money. I haven’t seen one guy yet that he’s beaten and I’m like, okay, he beat up somebody good.” (h/t BJPenn)

‘Borz’ was not happy to hear the comments Masvidal made on the podcast and made sure to let everyone know. Speaking to Hustle MMA, Chimaev hit back at Masvidal for his previous knockout loss to Kamaru Usman.

“I saw Masvidal still saying that I didn’t fight anyone,” Chimaev said. “Who did he fight? How can you say that after getting KO’d stiff? Usman almost sent him to heaven!”

In the second match between Masvidal and Usman, ‘Gamebred’ was on the wrong side of one of the most violent knockouts that put out cold at UFC 261.

While Chimaev looks to challenge Usman for the title, a matchup with Colby Covington is being explored next for him. Covington recently dominated Masvidal for five rounds earlier in March this year and will make for an exciting fight against him.