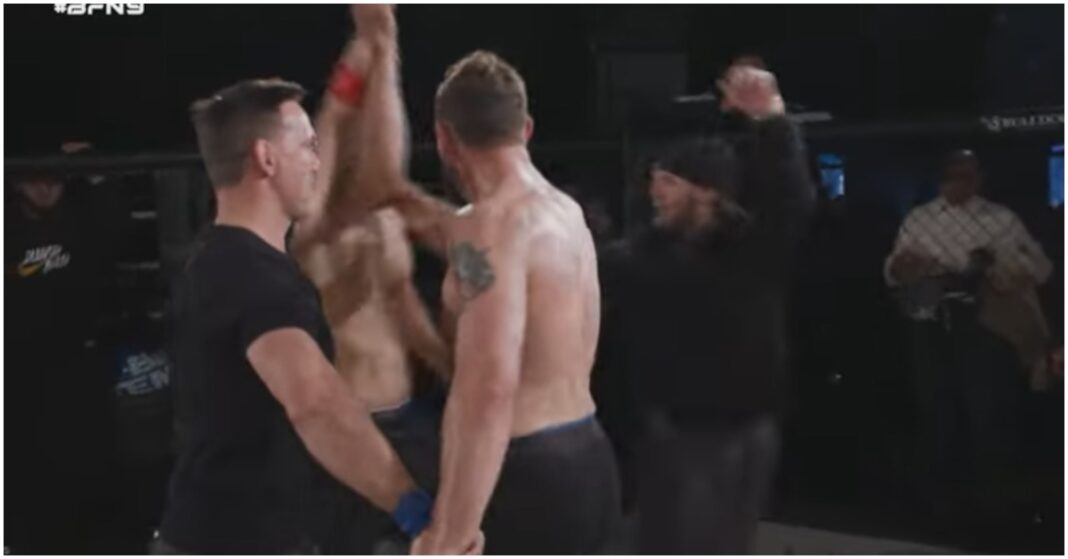 Khamzat Chimaev outwrestled Jack Hermansson but was then greeted by a fan as he stormed the cage.

Bulldog Fight Night 9 was a mix and match-up of events that included boxing, MMA, and wrestling bouts.

The event was headlined by Chimaev vs Hermansson in a freestyle wrestling matchup, where “Borz” would win in a dominant fashion and was met by a fan who managed to get past security. A few moments passed by before the overzealous Chimaev supporter was ejected from the event.

Chimaev is currently undefeated with an MMA record of 10-0 and a UFC record of 4-0, ‘Borz’ has been making a name for himself in MMA’s premier promotion with several dominant displays against increasingly tough opposition.

In his UFC debut Chimaev defeated John Phillips by second-round submission at middleweight, he would then ten days later fight Rhys Mckee at welterweight and would go on to win by TKO in the first round.

At UFC 267 in his most recent bout ‘Borz”’ would defeat fan favourite Jingliang Li by first-round submission, this would enter him into the top ten of the welterweight rankings.

Hermansson is currently ranked sixth in the middleweight division, going 2-2 in his last four fights with a first-round submission over fan favourite Kelvin Gastelum, and his most recent fight being a win over Edmen Shahbazyan.

However his losses have come to the number three ranked middleweight Jared Cannonier by TKO, and former title challenger Marvin Vettori.

Do you think we should have more wrestling matches with UFC fighters?