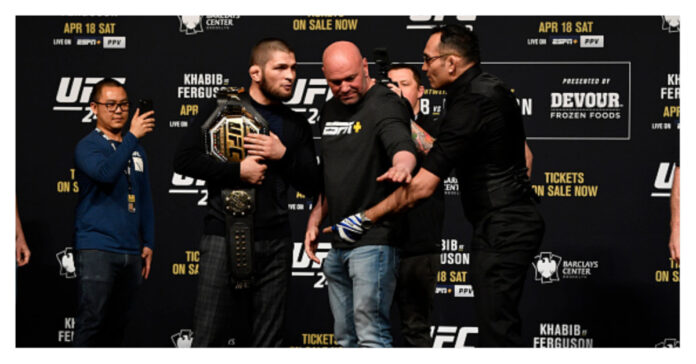 Tony Ferguson got a response from longtime rival Khabib Nurmagomedov, the latest in a series of verbal jabs lobbed at one another recently.

Nurmagomedov and Ferguson were scheduled to face each other in the Octagon no less than five times, but the bout never came to fruition for a variety of reasons. With Nurmagomedov happily retired and Ferguson looking for ways to recover from a four-fight losing streak, we’ll likely never see the two square off in the cage. However, both fighters have expressed interest in coaching on opposite sides for a season of The Ultimate Fighter.

The possibility of ‘The Eagle’ and ‘El Cucuy’ competing as coaches on TUF seems to have rekindled the rivalry. Ferguson got things going by taking a jab at the former champion, comparing him to pop star Justin Bieber.

“Hey Khabieber, you done with your world tour yet About time you man up and face a real coaches’ challenge. How about a pie-eating contest fatty? Nom nom nom, time’s time to make some real nose buddy foo foo, 29-1. I win – the champ.”

Khabib Nurmagomedov and Tony Ferguson Have Reignited Their Long-Running Feud

Nurmagomedov clapped back tweeting, “I’m waiting for you to wake up,” referring to the brutal knockout Ferguson suffered against Michael Chandler at UFC 274 in May.

Fans online are certainly enjoying the verbal sparring between the two lightweight icons. Even UFC president Dana White has taken notice, admitting that he is open to the idea of the two coaching on a season of The Ultimate Fighter. With fans generally unhappy with the lackluster season of TUF currently airing, Nurmagomedov and Ferguson could be exactly what the series needs to return to its glory days.

Would you like to see Khabib Nurmagomedov and Tony Ferguson coach on The Ultimate Fighter?