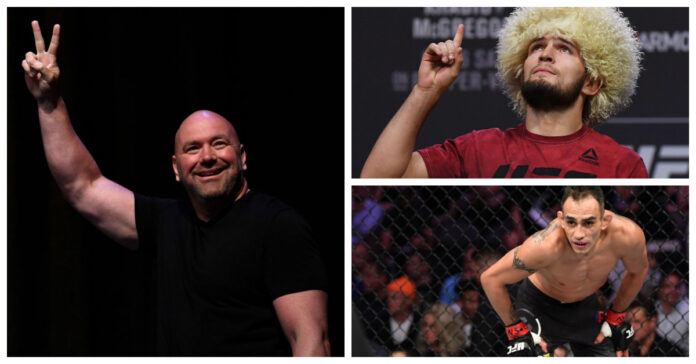 Khabib Nurmagomedov could be returning to the UFC against Tony Ferguson in a different setting as hinted by Dana White.

Former UFC Lightweight champion Khabib had an unblemished record inside the cage with 13 wins coming under the banner. There was a time when both Khabib and Ferguson racked up 12-fight UFC win streaks and were indisputably two of the best 155-lbs of their time. Having been matched up against one another five times in the past, not a single bout came to fruition.

After Khabib announced his retirement from the sport in October 2020, his dream fight against Ferguson was declared to be one of the biggest fights that got away. However, there may still be a way for these two to compete.

Last month, Ferguson expressed his desire to compete against ‘The Eagle’ in any sporting format, be it grappling or another form of an athletic contest. In a recent appearance on The MMA Hour with Ariel Helwani, ‘El Cucuy’ proposed the idea of coaching a season of The Ultimate Fighter opposite Khabib.

The undefeated Dagestani voiced his support for the idea and even offered to propose a deal on his own promotion, Eagle FC.

In a recent appearance on The Spinnin Backfist MMA Show, UFC President Dana White seemed to be interested in the prospect. While he did appear to be worried about having two coaches that won’t likely fight each other, he could get behind the idea if the fans want it.

“So you’re telling me, you guys as fans, media, whatever it might be, like the idea of two guys possibly coaching that wouldn’t fight each other?” White responded Tuesday when asked about Ferguson’s proposal.

“I’ll consider it. Congratulations. … I will absolutely entertain that idea.”

White continued to joke about having the two get mad enough at each other so they can actually make the fight happen.

“Hopefully they’ll get p*ssed off enough at each other that they actually want to fight and I can make them fight,” White joked. “I’m in. You sold me.”

Do you want to see Khabib Nurmagomedov coach TUF against Tony Ferguson?