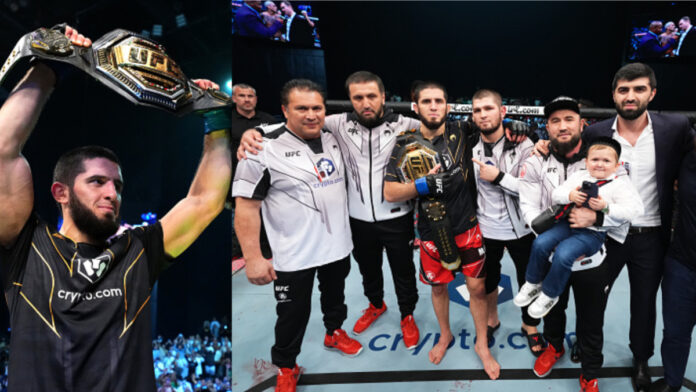 It’s no secret the bond that Khabib Nurmagomedov and Islam Makhachev share. Growing up in the Dagestani mountains and training together under the legendary Abdulmanap Nurmagomedov, a brotherhood was formed that has stayed true even to this very day.

Before Islam Makhachev was the terror of the UFC’s lightweight division, it was ‘The Eagle’ who reigned supreme. Like a supernatural being, Nurmagomedov made the greatest fighters in one of the world’s most competitive divisions look like mere amateurs. What was even more terrifying though, is as ‘The Eagle’ was preparing to retire, he often would say during any interviews that Makhachev was actually even better than him.

Of course, this added the utmost pressure to Makhachev who was already in the UFC at this point. However, as the age-old adage goes: “pressure makes diamonds”, and Makhachev is an example of that.

Under absurd amounts of pressure and expectation, the young Dagestani fighter would only continue to improve. He defeated any and everybody that stood in his way, and leading into UFC 280, was on a 10-fight win streak.

Islam Makhachev would make Khabib Nurmagomedov proud when he finally threw down with Charles Oliveira and captured gold. However, according to Nurmagomedov, he himself was the last true lightweight champion.

Khabib Nurmagomedov explains why he was the last true lightweight champion

“I told Dana, ‘I have to give him this belt, because I didn’t lose the belt,’ because I know I am the champion until this day, before Islam became champion,” Khabib Nurmagomedov confided in ESPN. “They said, ‘No problem. Take it. This is yours. This is Dagestani belt.’ They gave it to me, I put it on.”

Despite his confidence in Makhachev, ‘The Eagle’ admitted he was still very nervous ahead of UFC 280. “Because brother, I watch all his life, last 20 years, the way he works so hard, amateur career, professional career, and now he’s almost [there],” Nurmagomedov said. “This is a very hard sport. Any time anything can happen. Look at Kamaru Usman. He was winning all five rounds, boom, one time, finished – he loses belt. Same thing.”

“Any time anything can happen,” Khabib Nurmagomedov continued. “Charles is so good; he’s a high-level fighter, and of course, I was very nervous, because I love this guy. We grew up together. He was my father’s favorite student.”

What do you think about Khabib Nurmagomedov’s comments about being “the last champion”?