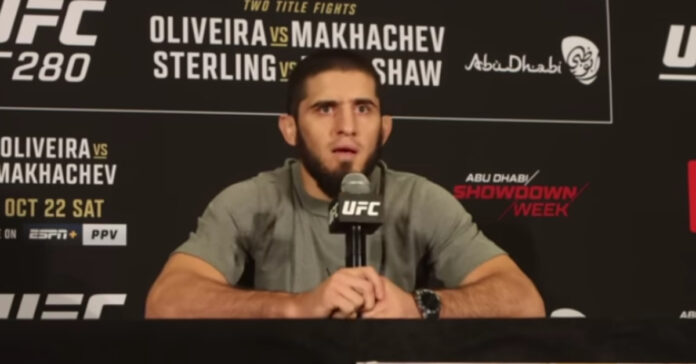 Despite an impressive 10 straight wins in the Octagon, Islam Makhachev is largely known for being Khabib Nurmagomedov’s protege. That could all change on Saturday as he challenges for the UFC lightweight championship.

Makhachev will face the toughest test of his career, taking on former lightweight titleholder Charles ‘Do Bronx’ Oliveira as the UFC returns to the famed ‘Fight Island’ in Abu Dhabi for one of the biggest cards in promotional history. A win for Makhachev would establish him as the best lightweight in the world, hushing skeptics who are critical of his lack of top-10 opponents. However, that’s just the tip of the iceberg for the Dagestani destroyer who aims to outdo the legendary career of his mentor, Khabib Nurmagomedov.

During his appearance at the UFC 280 media event, Islam Makhachev was asked directly if he intends to defend the lightweight title more than ‘The Eagle’ did in his career if he should walk out of Abu Dhabi with gold wrapped around his waist.

“I want to do more title defense,” Makhachev told reporters. “And jump to the other division.”

With 10 career submission victories, Islam Makhachev has proven to be more than capable of hanging with some of the best grapplers in the world. On Saturday, he will face the best submission specialist to ever step into the Octagon, Charles Oliveira. ‘Do Bronx’ has an astounding 22 career wins by way of submission and holds the record for the most submissions and finishes in UFC history. While most might feel intimidated stepping into a cage with a man of those credentials, Makhachev sees it as an opportunity.

“This is my goal: finish him in the ground because I have to show all people my grappling level,” Makhachev said.