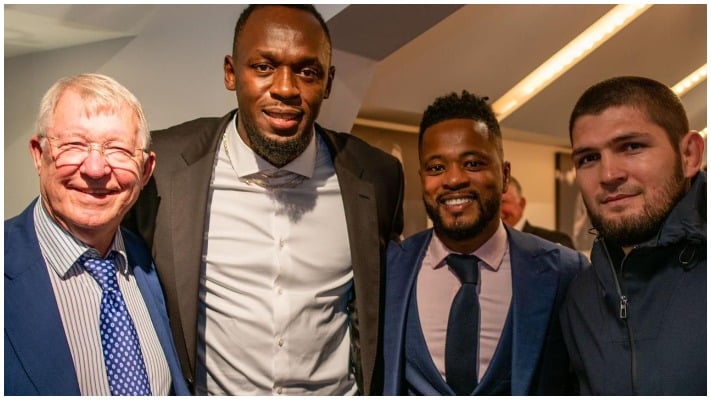 Khabib Nurmagomedov has hilariously explained how he turned down the offer of an alcoholic beverage from Manchester United legend, Sir Alex Ferguson during a recent trip to Old Trafford.

‘The Eagle’ landed in England earlier this week to take part in the Arnold Sports Festival. During a Q&A session at the event, the former UFC lightweight champion was asked about his religion and what advice he’d give to fellow Muslims when it comes to expressing their religion in the western world.

Nurmagomedov then went on to reminisce about the first time he met Daniel Cormier and the American invited him to a party.

“I have a lot of friends. I don’t know if they’re friends or not, but I know people who (have) two sides. They like (to) be Muslim and when the time come they are here (at parties).”

The undefeated Russian fighter explained that how you express your religion is a personal choice.

“This is (a) personal decision,” Nurmagomedov said. “Honestly, it’s not like, I am Muslim, and I am proud, and I talk about this everywhere. When I meet people, I never talk about nation, and I never talk about religion this is because this is your own decision. You don’t choose where you are born, your nation, or something like this. If I feel something I (will) say. For example, If I feel like Allah gave me this, I believe this, and I have a microphone of course I’m going to talk – this is very easy.

“Some people they’re shy, they don’t want people (to) know. They are shy but I’m not shy. Everybody knows, all my friends, even (if) they’re different religion. They know I eat Halal (and) I don’t drink.”

Nurmagmedov finished off with a much more recent example of him turning down the offer of alcohol, this time from one of the biggest legends in football.

“Even today, when I was in Old Trafford. I was with Patrice Evra, it was Usain Bolt, it was Sir Alex Ferguson and Alex Ferguson asked me about wine,” Nurmagomedov said. “For him (it) is good. I don’t judge him, you know. How I have to explain (it) to him, there is two things. You can be straight and say, ‘No, I’m Muslim I never drink.’ But (the) other thing is, I told him. ‘This is not good because If I drink, I can smash all of you guys. This is not (a) good idea for you.’”

Do you think Khabib Nurmagomedov handled that situation well?