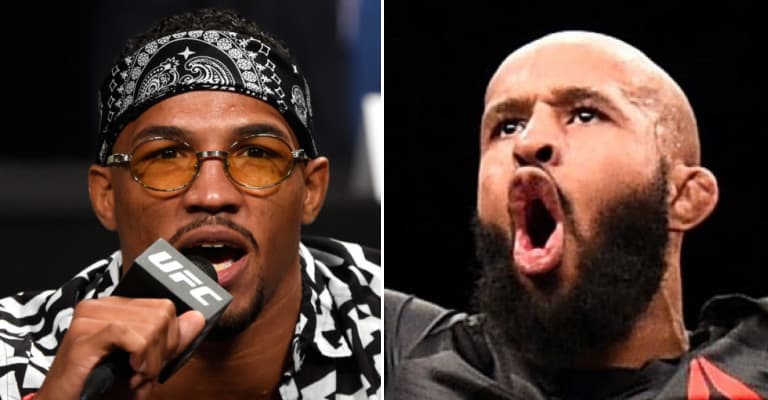 UFC 216 headliner Kevin Lee has risen from relative obscurity to fighting for the interim lightweight title in a little over a year.

Now riding an impressive five-fight win streak including four finishes in a row, Lee is set to take on Tony Ferguson in the main event of the pay-per-view (PPV) card from Las Vegas on October 7, while longtime flyweight champion Demetrious Johnson takes a back seat as he attempts to secure his record-seeking 11th title defense in a row against Ray Borg in the co-main.

While it may seem unfair for Lee to headline UFC 216 over the far more accomplished ‘Mighty Mouse,’ the Detroit, Michigan native actually sees it as favorable for the flyweight champ, who has historically not been a ratings draw compared to his fellow UFC champion colleagues.

““I think that’s the way it should be. The UFC knows that…

“Look, Demetrious if anything, Demetrious should be thanking me. He’s getting pay-per-view points for the first time in his career, and it’s going to be because of me. So, if anything, I’m looking for a lil’ Christmas gift from Demetrious… I think the demand is definitely out here, more for this fight, than especially Demetrious vs. Ray Borg. I mean come on. Demetrious has to give it up to me. I’m putting money in his pocket; how can he be upset? When we do the press conference, and I’m sitting right next to him, I’ll let him know.”

Johnson notoriously turned down a super fight with former bantamweight champion TJ Dillashaw in favor of a fight with the far lesser-known Borg, much to the public chagrin of UFC President Dana White.

The Borg fight was initially scheduled for September’s UFC 215; however, a last-minute illness forced the challenger out of the fight and off the card.

Whether or not Johnson’s refusal to fight Dillashaw played any part in his taking a back seat to Lee vs Ferguson remains unknown, but Lee figures his fight with Ferguson is the main event for a reason.

“I think people are excited to see more out of me, and I’m excited to show it to them. Tony, he can take a shot. He can keep moving. He even scrambles well on the ground. I feel like we will have a lot of different exchanges, a lot of momentum. I’m excited for it.”

Do you agree with Lee vs. Ferguson headlining over ‘Mighty Mouse’s attempt to make history?