LowKickMMA.com
Home UFC News Kevin Holland is happy retired but open to comeback for ‘something super-duper... 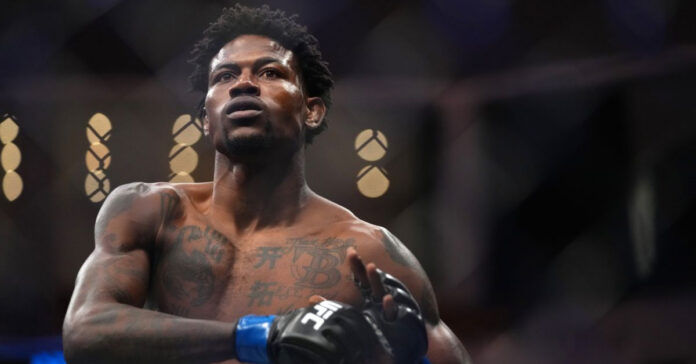 Kevin Holland has no plans to return after calling it a career.

Former UFC welterweight Kevin Holland was last seen in action against rising prospect Khamzat Chimaev at UFC 279 a month ago. He was initially set to face Daniel Rodriguez in a catchweight bout at 180 pounds but got paired up with Chimaev after ‘Borz’ came in seven and a half pounds over the contractual weight limit for his headlining fight with Nate Diaz.

Chimaev handily finished Holland in the opening round after which Holland announced his abrupt retirement.

In the debut episode of his new podcast, Real Eyes Recognize, Kevin Holland opened up about his decision to step away from the sport and reiterated his original stance.

“So I’m retired. I’m officially retired,” Holland said (ht MMA Fighting). “I’m retired from fighting. I had a good fight, good payday, I had a good run. I see some of the people online [saying] ‘obviously he realizes he’ll never get the belt’ and my little psychedelic trip, that means I was wrong. I can’t be wrong on a psychedelic trip. I’ve lost coming out to Young Boy. That was my last hope, never losing coming out to Young Boy. Times are rough for your boy.“

He left the door open for a potential comeback only for the right opportunity.

“But I’m really, really happy on the green side. Unless something super-duper magical pops up, yeah, I’m pretty happy with the way things are.”

Holland took issue with some previous comments made by former UFC heavyweight Brendan Schaub and challenged him to a sparring session.

“Brendan Schaub, he’s always saying weird stuff,” Holland said. “We’ve got to get some boxing rounds in for some of the fly stuff he was saying. No MMA. He might take me down and I don’t have time for that s***. That’s why I retired, I don’t want to wrestle anymore.. I think he’s down [to box]. He’s not a p**** unless he’s a p**** and then he wouldn’t be down. For sure, boxing, me, Schaub, weight doesn’t even matter in that situation.”

Do you want to see Kevin Holland return?

READ MORE:  Paddy Pimblett lashes out at Ariel Helwani, calling him a “rodent” and a “biased content creator”