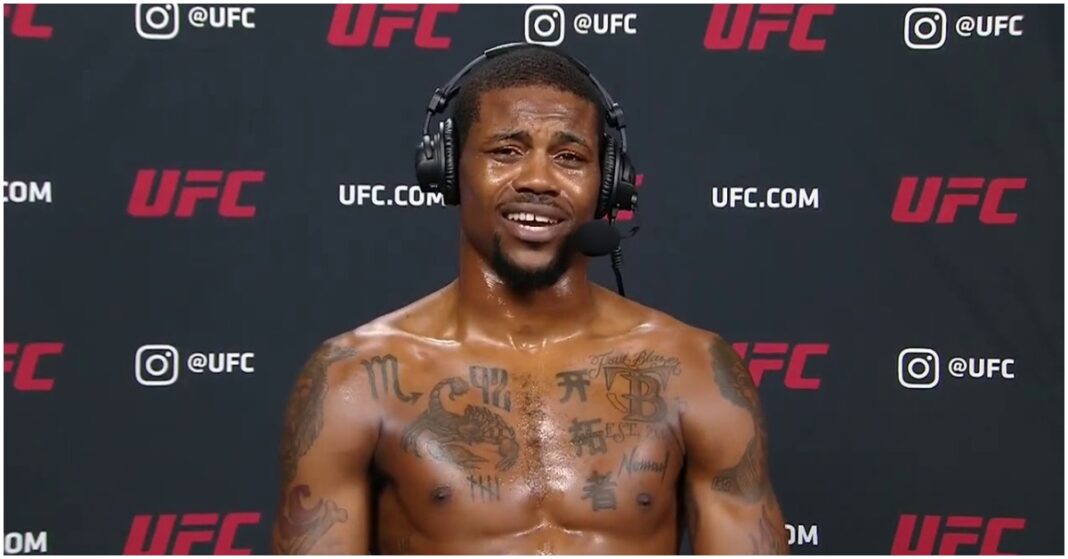 UFC welterweight, Kevin Holland, has recounted yet another heroic deed, this time the pulling a man out of a flipped tractor-trailer.

Since his breakout year in 2020, Kevin Holland has quickly become a fan favorite. With an exciting style and a ‘big mouth’, Holland is can’t miss television. Recently, though, it’s not been his in-cage antics that have captivated fans, instead it’s his acts of heroism; this time pulling a man out of an overturned vehicle.

“I’m driving down the road,” Holland said talking to MMAFighting. “Enjoying some good old 80s and 90s music, just cruising. It’s fast but it’s cruising, and then I look over to the right hand side and this guy looked like he was trying to get on the freeway pretty quick.”

“I looked back straight. I looked back to the right hand side and he’s sliding sideways. I’m like gosh. I pull the Regal over, glad I put the new brakes on there. Hopped out, ran over there, jumped on top, ripped the door open, got the guy out.”

Holland explains that unlike other situations that he has been in, he felt genuine fear this time, but the man had other plans and even returned to the truck to retrieve his belongings, only to be helped out by Holland again.

“I get the guy out, there’s fluids flowing out of the car, I get the guy out of the truck and I’m scared,” Holland said. “Every other time things have happened, I’ve been calm, cool and collected. This time, I’m scared. I’m like the truck’s going to blow up. The guy gets back in his truck! He’s like ‘I need my phone.’ I’m like bro, I got a second phone in the car, you don’t need your phone. We’ve got to go. He’s like ‘I’ve got to go get my shit.’

“So I help him get out the second time, and I’m like bro, we’ve got to go. He’s like, ‘I think I need something else out of the truck.” my ass in the car.”

Back in March of this year, Holland helped apprehend a gunman in a restaurant in his hometown of Houston.

Holland explained while eating at a restaurant a man had opened fire, letting off a shot, so Holland was quick to jump to action. While another man began to wrestle with the shooter, Holland grabbed the man, pulled him into his lap before wrapping his legs around him and applying a rear-naked choke.

“As soon as he was [asleep],” Holland said. “I let go of the choke, slid out on top, got full mount, stretched the arms out so he couldn’t reach for anything.”

The police would eventually arrive and arrest the suspect, Jesus Samaniego, who was eventually charged with deadly conduct and unlawfully carrying a weapon.

What’s your take on Kevin Holland?