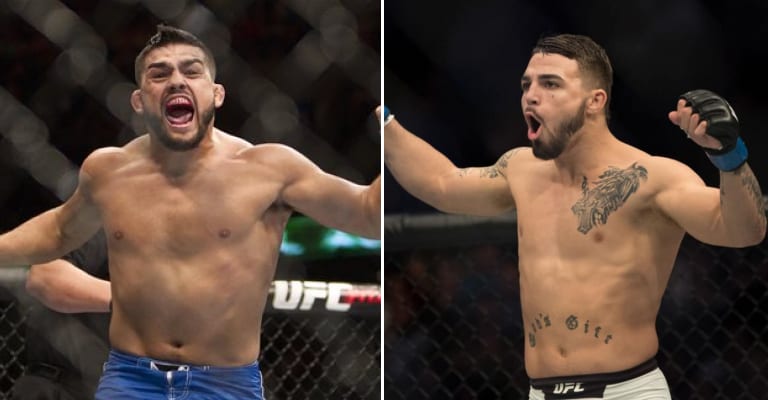 A few weeks back, we reported on Mike Perry’s public rejection of Kelvin Gastelum’s Facebook friend request. The two had engaged in a social media back-and-forth, with Perry ultimately appearing to come out on top.

Perry had actually initiated the war of words after posting a comment to Gastelum saying “Jacare” will choke The Ultimate Fighter winner out when the two meet at UFC 224.

Gastelum has finally broken the silence over his spat with “Platinum” and the story behind his now-infamous friend request (MMA Fighting):

“What happened was, I woke up one day, and I went to check my Facebook. Then he, randomly, I got a Mike Perry comment. I’m like ‘alright, I’m gonna check it,’ and it said ‘Jacare is going to strangle you.’ I’m like, alright, I didn’t reply, I didn’t ‘like’ it or anything. What I did was, I tried to mess with him just to see what he would do, and I sent him a friend request.”

“I kind of feel like it backfired. Because he blew it up on Twitter, he kind of made me look like a fool or at least I felt like it. But yeah, I’m not worried about him. I was just kind of messing around just to see what would happen.”

“I’ve learned that people will say anything online. Anything to get your attention, to get you to respond to them. And many of those people are the saddest people on earth. I don’t pay any attention to it. Only sometimes when I want to have some fun. … I used to read the comments and think ‘oh my god, what are people thinking about me, what are they saying about me?’ But now it’s just like, I realize some of those people are the most saddest people on earth.”

While Gastelum did compete at welterweight for a good portion of his UFC run, he’s now fighting at middleweight following several failed weight cuts to make 170 pounds, where Perry currently competes.

So, it’s unlikely the two will settle their differences in the cage, at least anytime soon.

Their online battle may rage on, however.