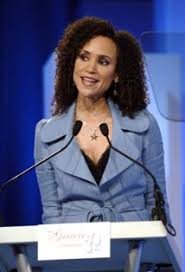 We went directly to the source (or at least one side of it), asking Karyn Bryant about motors, boats, Rampage Jackson, superheroes and what’s her favorite tune from the 90’s.

Karyn Elaine Bryant is married to Wade Eck, with whom she has one child, a daughter Aurora. Bryant has an impressive resume of hosting TV Shows on MTV, VH1, TNT, NBC, CNN, ESPN, Showtime and many others. Karyn Bryant currently co-owns MMA H.E.A.T., which stands for Heart, Endurance, Aggression and Technique. MMA H.E.A.T. for their extensive coverage of Mixed Martial Arts, always bringing the best out of fighters’ personalities on camera.

You went under fire recently for what happened with Rampage. Many journalists are writing articles about how you should get offended and why what Rampage did was wrong. What do you think about this whole thing?
What happened between me and Rampage was different from what happened to the CagePotato girl. He didn’t touch me, and we were just laughing and having fun. If I didn’t feel comfortable about it, I would say something, don’t you think so? I wasn’t worried about it at all. I mean, would tell him to back off if I didn’t feel okay with it.

And also, it’s not your first interview with Rampage…
Yeah, exactly. And people are also giving me a hard time about the “black fans” question. I was really interested about his fan base, and how it’s growing with that group of people. It was a real question.

There’s also a transcript of your “Motorboat” conversation with Rampage Jackson on MMAFighting (by Michael David Smith), and I have to say when you’re reading a text version – you’re getting a totally different impression than actually watching the video, and understand that there’s a friendly vibe and it’s nothing but a good humor.
Yes. Everyone who seen any of my interviews knows my personality. I’m all about giving more fun interviews, entertaining the fans, joking and stuff like that. I’m not an uptight person.

If that type of thing happened to Heavy.com’s Megan Olivi for instance, what would be your opinion?
Well, I know Megan a little bit, and I know that she knows how to handle herself. She would put someone in his place if she felt uncomfortable. Again, there were so many people around during that interview, so I never felt like I was in any real threat of being… molested. I don’t really want to talk about other women and how they should handle it, or if they should handle it the way I did, simply because everyone has their own personality, and their own “state of mind” when it comes to situations like the one I had with Rampage.

After the interview, did you and Wade think it could develop into such a big story?
I mean, Wade was filming the whole thing. He’s always there behind the camera, and we took it as a joke anyway.  If I was offended, a. we wouldn’t put it up on YouTube, and b. We’d sue Rampage for what he did. But it was all fun, Rampage was in great mood after the fight, and we really enjoyed the interview.
– Wade Eck: Actually, after it happened, we immediately went on to interview Dana White and Travis Browne. It’s not like we were shocked, stopped the interviews or left the post-fight press conference.
Karyn Bryant: It takes much more than that to horrify me. And in all seriousness, I don’t want fighters to think now that they can’t joke with us. That’s what MMA H.E.A.T. is all about. We love talking to fighters and showing their personality a little bit more. Listen, when you put men and women together in any context, there might be some stuff going on… it’s not a crime.

There’s also an interview with Ariel Helwani, where Rampage gets a little bit physical. At least in my opinion, jokes are good, but until a certain point when it’s not a joke anymore. You just got to know when to stop.
The relationship Rampage and Ariel have is their own thing. I really don’t have an opinion about how either should handle this. Simply because I know that Ariel Helwani is a very smart guy, and he knows what he’s doing.

Okay, let’s get to the “fun section” of our interview. If you had a chance to become a Superhero, who would it be?
I would like to be a mind reader, like Professor X. But I also want to fly, so I’ll take this one from the Superman. Oh, and I’ll take Storm’s hotness.

Your favorite music hit from early 90’s?
Wow, that’s hard. I spent a lot of time with Red Hot Chili Peppers and Jane’s Addiction. You know, being on MTV during that era, I would say that “Give it away” by Red Hot Chilli Peppers is my favorite.

Who are your favorite fighters?
I’m a huge Shogun fan. Everyone knows I’m a Shogun fan. I like Randy Couture, sorry that he’s done. He’s a great guy to watch and had a very big influence on this sport. Who else… oh, I like Scott Jorgensen a lot. Also, Rashad is getting a lot of heat, but he’s a very nice person and he’s very funny. And of course Anderson Silva. He’s phenomenal, and I can’t understand how some people say he’s overrated.

You interviewed so many people. Do you still have a “dream interview”?
I would like to spend more time with someone like Anderson. To pick his brain more. Who else…

Chael Sonnen?
Well, actually it’s an interesting one. Because he likes to be smarter than everyone else, but I don’t think he will be able to get over me. It could be a great challenge.

Alright, Karyn. Thanks a lot for your time. You know, it was really important for me to get your side of the story out there.
Yeah. You see, people who know me, know that it’s not the thing I would be bothered by. I didn’t want to speak for all women, because it’s everyone and how they feel about themselves, their environment and I just know that for me, I’m okay with that type of thing. Thank you.