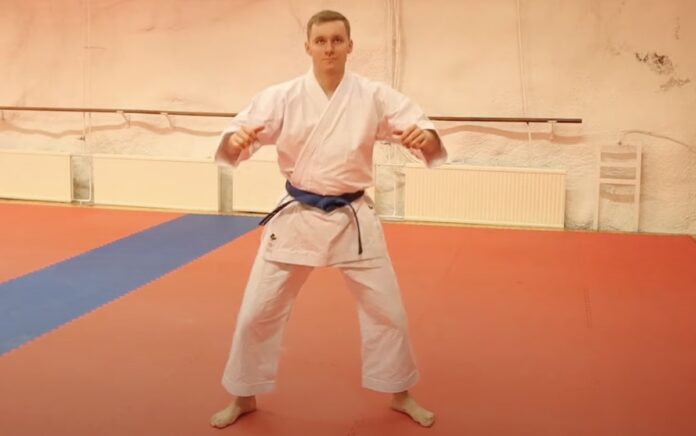 Karate is one of the formal martial arts, where practitioners wear a Gi. The Karate uniform is unique from other martial arts and each piece of the gi has a special meaning.

The history of the karate Gi

Training before the karate gi

When Karate was just beginning to be developed and practiced, there were no formal uniforms. Early karate students would practice in their normal street clothes.

This was also before the creation of Karate dojos, so students would regularly be seen training in public places in Okinawa. During this time Okinawans were looked down upon by Japanese mainlanders and especially if they practiced martial arts.

Mainlanders associated Okinawans practicing martial arts like Karate with the culture of samurais. Something that they thought was brutish, old fashioned, and wanted nothing to do with.

One of the founding fathers of modern Karate, Gichin Funakoshi realized that he needed to make Karate more marketable to mainlanders. The first step was to make the martial art more formal and introduce the uniforms.

Funakoshi was inspired by Judo founder Jigoro Kano, who created the “keikogi” or Judo Gi. A heavy hemp training uniform that was built more for grappling, but was incredibly durable.

Kano and Funakoshi were also good friends that trained together, which helped with the integration of the Gi in karate.

For a short time, Karate practitioners would actually use Judo Gis in their training. Master Funakoshi himself would only wear a white Judo Gi long after the creation of the Karate Gi.

He even did Karate demonstrations in a Judo Gi at the Kodokan.

The development of the karate Gi

The Judo Gi was a durable uniform, but it wasn’t built for the movements of karate. This led to the development of a specialized Gi made for Karate.

A Gi made of lighter cloth to maximize the mobility needed to do the movements in Karate. Practitioners would call their Gi, a “karategi,” “keikogi” or “dogi” for short.

This would become the official uniform worn by all Karate practitioners that are still used in training and competition today.

What is the meaning of these terms for a karate gi?

In Japanese, the word for clothing is “Gi.” So, to make the work “karategi” the words Karate and Gi were combined.

The word “keikogi” is the combination of the words keiko and Gi. Keiko means training, which means keikogi means training Gi in English.

Most karate practitioners use the term “dogi” as a shortened version of the word karategi. Taking the do at the end of Karate-do and combining it with the word Gi.

Names for the pieces of a karate Gi

A Karate Gi is made up of three different pieces of cloth. Each of these three pieces has a different name.

Karate Gis must keep their Gi clean and presentable or they won’t be allowed to participate in class.

Karate Gis are generally made from three different kinds of material. Those are: Cotton, light canvas, and synthetic cotton.

The first Karate Gis were made out of cotton rather than using hemp like with the original Judo Gis. They allowed for better movement for practitioners, while also being breathable.

Light canvas cloth is arguably the best quality material that Karate Gis are made of. These are breathable like cotton, but a bit more sturdy and last the longest out of all Karate Gis.

Karate Gis made out of synthetic cotton are the worst of the three types of materials. They feel more like a light shirt that you would wear in Summer.

They easily tear and the fabric sticks to you when you start sweating. This is the preferred karate Gi of Mcdojos.

Just like with BJJ Gis, there are different styles of Karate Gis. Those styles are: Japanese cuts, kata cuts, and European cuts.

The Japanese cut of Karate Gi is the most used out of all of the styles of karate Gis. This cut includes short sleeves and pant legs for less restriction to your movement. Also longer lapels to prevent the belt from riding up high.

The kata cut is a type of Gi that you will only see used in kata competitions, if at all. These cuts include even shorter sleeves than the Japanese cut.

European Gis are made with long sleeves and the most fashionable out of the three. You’ll most likely see this cut in photoshoots.

Originally, a Karate Gi only came in white, but as time went on they were made in various colors. Now, the color of your Karate Gi will depend on the school that you’re a part of.

Differences between Karate GIs and other martial arts Gis

A Karate Gi is the most lightweight out of all of the martial arts Gis. The sleeves and pants are shorter than grappling Gis, so that your movement isn’t restricted to doing punches and kicks.

Judo Gis are the first martial arts Gis ever made. These are heavy duty Gis made of tough fabric that is designed strictly for grappling. They are similar to BJJ Gis, but the sleeves and pant legs are shorter.

BJJ is another heavy duty Gi made with heavy duty material that’s designed for grappling. It’s similar to a Judo Gi, but has longer sleeves and pant legs due to the grips used in Jiu Jitsu.

Taekwondo Gis are called “doboks” and they are lightweight like a Karate Gi, but with a completely different design. They either come in traditional cross over jackets or vertical closing jackets.