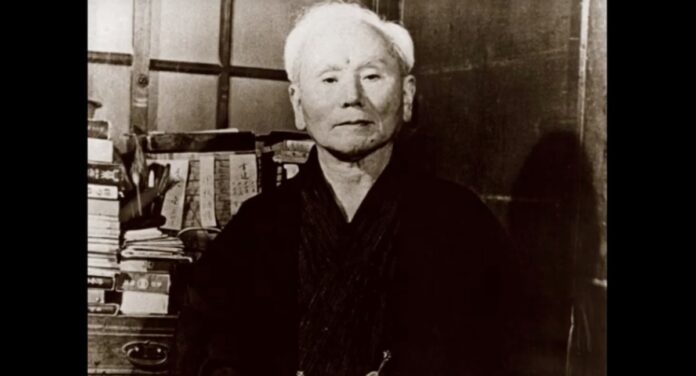 The art of Karate would not have become what it is today without the work of Gichin Funakoshi. His work in pushing Karate to the masses helped it become one of the most practiced martial arts in the world.

Here is the story of the creator of Karate, Grandmaster Gichin Funakoshi. Going over how he began practicing martial arts and how he developed Shotokan Karate.

Before he became the father of modern Karate, Funakoshi grew up on the island of Okinawa. His family came from a lineage of samurai that were vassals of Ryukyu dynasty nobles.

Because of this, Funakoshi’s family had instilled the importance of honoring his family, respect, and education. Qualities that would help him develop his own martial arts style later on.

From an early age, Funakoshi would begin learning various Japanese martial arts. In primary school, he befriended the son of a Ryukyuan Karate and Jigen-ryu master named Anko Asato.

Master Anko would become Funakoshi’s very first martial arts teacher when he was eleven. He proved to be an exceptional student and quickly developed skills that would rival the skills of his master.

While Funakoshi strived as a young martial artist, he was also one of the top students in his class. Earning high marks in every class and later passing an entrance exam into medical school.

Unfortunately, Funakoshi would not be allowed to attend due to the Meiji government’s ban on topknot hairstyles. A hairstyle that Funakoshi wore to honor his family and their samurai heritage.

Prejudice towards Okinawans by Japanese mainlanders also didn’t help Funakoshi’s case to enter medical school. He would decide to pursue learning Japanese and Chinese philosophy instead of going to medical school.

The development of Shotokan Karate

Funakoshi would go on to develop his own form of Karate that he would call “Shotokan Karate.” It was named after his pen name Shoto that means “waving pines” and Kan that means “training hall/house.”

This is how he came up with the name Shotokan, which translates to English as the “house of Shoto.”

The characteristics of Shotokan Karate

The characteristics of Shotokan Karate that Funakoshi created is divided into three parts. Those are: kihon(basics), kata(forms/pattern movements), and kumite(sparring).

In Shotokan Karate, you hold a deep and long stance that enables you to have stability and balance. From having a stable base, this allows you to perform powerful movements that include various punches and strikes.

Like Muay Thai or Taekwondo, Shotokan Karate is a dynamic martial art. In the training, you learn to throw fast and powerful techniques that are designed to incapacitate your opponent.

All while being able to move fluidly to make the techniques look as natural as possible.

Gichin Funakoshi time as a teacher

Funakoshi was able to spread his martial art thanks to his time as a teacher at the Okinawa’s Teacher School. He was also the head chairman of the Okinawan Martial Arts Society.

Having these positions allowed Funakoshi to have influence within schools on the island. Avidly pushing for his school to include a Karate club.

His wish was granted and Gichin began growing a large group of students that learned under him. The success of this Karate club would lead other Okinawan schools to include their own clubs.

Gichin’s influence led to Karate becoming rather popular in Okinawa. He would then set his sights on his biggest challenge of getting mainland Japan to accept Karate.

The development of the Karate Gi

Gichin had grown a large following of students, but there was still work to be done. Getting mainlanders to accept Karate would be tough due to their prejudice towards Okinawans.

One thing that Funakoshi realized that Karate needed was its own official training uniform. His students would train in their normal class, which made Karate look disorganized and informal.

This would lead Gichin to first adopt a Judo Gi into Karate Gi. A sturdy robe that could be used repeatedly without the clothes tearing or wearing out.

Judo Gis would be used for a short time until Funakoshi helped develop Karate Gis. A more lightweight Gi made of cotton that was better designed for the movements of Karate.

In 1922, Funakoshi would get his first chance to show his martial art to mainland Japan. The Ministry of Education sponsored the first ever Physical Education Exhibition.

Gichin would get invited to show what he then called Karate-jutsu to the ministry for the first time. The demonstration went perfectly and helped Funakoshi become a known martial artist throughout Japan.

After the success of the first Karate demonstration in mainland Japan, word got out about Funakoshi. One person that was intrigued by this martial art was the founder of Judo, Jigoro Kano.

Master Kano would invite Funakoshi along with his pupil Gima Shinkin to the Shodokan. The main Judo training headquarters, which is located in the heart of Tokyo, Japan.

This was the biggest opportunity of Funakoshi’s life and his big chance for Japan to accept Karate. Funakoshi would even wear a Judo Gi during his demonstration

The Kotokan was packed to see the display and it was a roaring success.

Master Kano approved of the demonstration, as well as the Japanese media. It would lead Funakoshi to be pressed to stay in Tokyo and teach Karate to mainlanders.

After being pressed to stay in Japan, Funakoshi took a teaching job in the city. He would teach Karate at the Meiseijuku, which was a dormitory for Okinawan students at the university.

While teaching, Funakoshi would begin writing his book “Ryukyu Kempo Karate.” A guideline to the teachings and philosophies of Karate that was published in 1922.

It was so eloquently written by Gichin that it created the first Karate boom across Japan. Everyone wanted to learn this new effective martial art.

To make Karate more legitimate to the masses, Gichin would create a Dan certification system. Dans being the levels of Karate black belt. He would lay out how to earn these ranks along with how long it takes to reach each one.

Originally, Karate was called “Karate-jutsu” and the characters signified the words Chinese and hand put together. To be able to sell the martial art to the rest of Japan, Gichin would need to make changes to the terms within it.

The term Kara+te would be changed to mean “empty hand” and Karate-jutsu changed to Karate-do. Changing the original meaning of “Chinese-hand martial art” to “the way of Karate” or “way of empty hand.”

He would also change the names of all of the katas to Japanese terms and wrote “The Twenty Precepts of Karate.”

The creation of the Shotokan Dojo

By 1939, Funakoshi had traveled all over Japan teaching his martial art. He now had a growing number of students, but did not have a place to teach them.

This would lead him to construct the first Shotokan Dojo in Tokyo. Funakoshi used his own funds to build this gigantic training center for him to teach at.

For anyone around Japan that wanted to learn from Master Funakoshi, they could go to the Shotokan Dojo.

The legacy of Gichin Funakoshi

Thanks to Gichin Funakoshi, the art of Karate has become part of every school and university in Japan. Karate had become synonymous with the country of Japan, which the people embraced.

Before his death, Funakoshi would not only realize his dream of spreading Karate throughout Japan, but to the world. There are an estimated 100 million Karate practitioners in the world with the martial art being practiced on every continent.