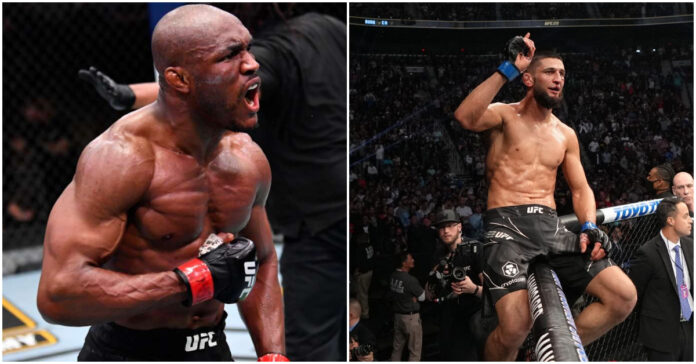 Khamzat Chimaev generated a ton of hype going into his battle with Gilbert Burns at UFC 273. Chimaev made his debut in the promotion in July 2020 with a submission win over John Phillips. ‘Borz’ went on to dispatch Rhys McKee in the first round just ten days after his first win to mark the fastest turnaround win in the history of the organization.

Current pound-for-pound king Kamaru Usman remained relatively silent on the rising prospect with brief takes on the Chechen-Swede fighter. At UFC 273 on April 9, Chimaev passed his toughest challenge yet in Gilbert Burns after a close-fought win that saw him prove his worth beating the second-ranked contender.

In a recent interview with TMZ Sports, Usman gave his breakdown of Khamzat Chimaev and shared his advice for the upcoming talent.

“You get a kid like this that comes in and has all this hype and everyone is talking about him. It’s great. It’s great for the sport. It’s great for guys like myself. It’s very good,” Usman said. “Khamzat coming in, he’s definitely showed – He’s going a great job. Props to the kid. He’s done a great job with what he’s been presented and the opposition. I take nothing away from him.”

“I think it’s the media’s fault. The media kind of builds you up and then they drop you the moment you don’t live up to that. If I had a word of advice for him it’s just to not get caught up in that because it kind of seemed like that was starting to happen. Don’t get caught up in that because not every day is your day. At some point, someone’s going to come in and it’s going to be their day.” (transcribed by MMA Weekly)

Kamaru Usman vs Khamzat Chimaev next?

UFC president Dana White indicated the UFC 273 welterweight bout to be a title eliminator with the winner getting closer to taking aim at the champion Kamaru Usman. White shut down the talks of the fight being a top contender one as he hinted at the possibility of Khamzat Chimaev facing Colby Covington in a main event fight next.

Usman is in a weird situation right now having beaten all top contenders, some even twice. He’s recovering from a hand injury and is expected to fight Leon Edwards in his return. UFC is not clear on how the division will proceed ahead and for how long Usman is to sit out. This brings up the option of a top contender fight between Chimaev and Covington as Edwards could likely face either of the two to stay in the mix of title contention.

“He (Chimaev) has gone out there and he beat the No. 2 guy in the division. He got the W, so it’s very difficult for me to say, no, he doesn’t deserve anything,” Usman said. “He’s gone up against Gilbert Burns and was able to go out there and do what he needed to do. I take nothing away from him. If that’s the fight then that’s the fight. If that’s not the fight then that’s not the fight. Right now, we kind of have Leon Edwards sitting there.”