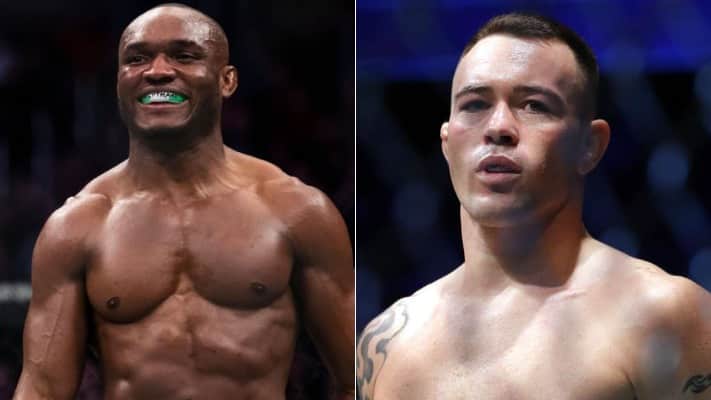 The rematch between Kamaru Usman and Colby Covington has gotten off to a far more civil start than their previous meeting.

Usman and Covington first met face-to-face at UFC 245. The lead-up to the fight featured more than it’s fair share of trash talk from either side, most of it going far beyond the usual pre-fight build up. However, when all was said and done, Usman got the last laugh with a 5th round stoppage to defend his welterweight title.

Ever since, Colvington has continued to go after Usman online, from immediately calling the stoppage premature to accusing ‘The Nigerian Nightmare’ of being on steroids. Despite the trash talk that’s taken place between both men over the past two years, Usman still gave praise to what Covington has accomplished in an interview with Helen Yee (h/t MMA Fighting).

“He’s definitely up there,” Usman said. “I’m no hater, I give props where props are due. I think Colby probably is, I would put him in the top-15 welterweights of all time, as far as fighter-wise and skill-wise, the way that he fights. You may not like him personally, which I really don’t, but as far as skill-wise, he’s a good fighter. A very, very good fighter.”

In the time since the competitors last met, Covington has fought just once, claiming a fifth-round stoppage of his own over former welterweight titleholder Tyron Woodley. As for Usman, he has gone on to stake his claim as one of the pound-for-pound best currently fighting, taking victories over Gilbert Burns and Jorge Masvidal (twice). Regardless of what both men have gone through since their first meeting, Usman expects their rematch to be more of the same.

“I think we were both content with understanding that was a Mano a Mano, we needed to duke it out, we needed to go back in the day and just throw fisticuffs and see who got the better of the other,” Usman said. “I told him, I said I would punish him for four and a half rounds and I would finish him and that’s exactly what I did. I think in this next fight he’s gonna try to be a little more strategic but he’s going to quickly realize that’s not gonna work so you’re just stuck in there getting beat up.”

A victory at UFC 268 would be Usman’s fifth consecutive title defense. That would move him into a tie with Matt Hughes for second all-time behind Georges St-Pierre as far as welterweight is concerned.

Usman has shed the title of being a “boring fighter” by earning stoppage victories in three of his last four fights. However, don’t expect him to try to force the issue when he takes on Covington again.

“It doesn’t matter. Finish or not, the way I fight I want to dominate a guy from start to finish,” Usman said. “I want to out-class a guy. I want a guy to go home, when they lay down in bed at night they’re like, ‘S–t, that guy’s better than me. There was nothing I can do to beat him.’ That’s what I want. That’s the feeling that I want to live with these guys each and every time they compete against me. So whether I finish him or not, I want him to have that feeling. But of course, the finish is great and that’s something that people highly anticipate from me right now.”

Who do you think wins Kamaru Usman vs Colby Covington 2? Let us know!