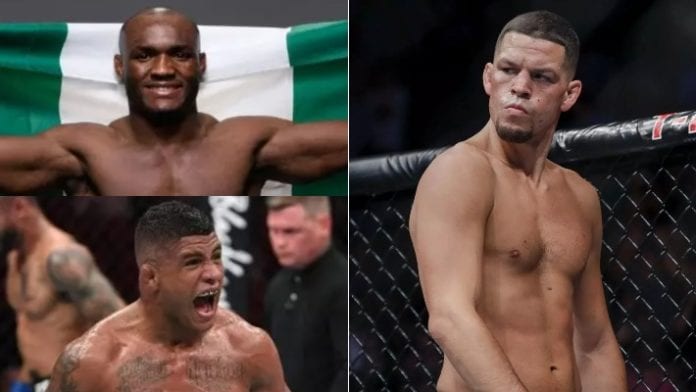 Kamaru Usman and Gilbert Burns were quick to fire back at Nate Diaz.

After it was revealed that Usman would defend his welterweight title against teammates Burns in the UFC 251 headliner on July 11, Diaz slammed the title fight and mocked the pair for fighting for less money.

“This is what’s wrong with people claiming they’re fighters settling for less cause they know they’re not worth sh*t you should’ve fought the next guy in line not the guy who would take less cause he’s told too that’s why no one will remember you guys. This isn’t a title fight”

Diaz proceeded to take another jab at the pair.

Usman, Burns Clap Back At Diaz

Usman would respond to Diaz soon after with a number of tweets.

“Funny I didn’t hear you volunteering when they were looking for the next victim… ??‍♂️

“Your Bum Ass, the other “said guy” who just embarrassed your ass, and McNuggets Bum ass all ran and hid. So shut TF up and Sit TF down. Oh and don’t forget to buy the PPV ??? #UFC251

“Burns:
•6 Fight win streak in less than 2 year span.
•KO over Maia who defeated “said guy”
•(50-44) domination over #1 WW Woodley who you turned down for a title fight.
•Burns Is a true martial artist and not all talk. #UFC251

“Bottom line, if you got double digit L’s shut TF up and sit yo Bum Ass TF down. Oh and once again don’t forget to buy the PPV ???”

“”Durinho” also took a jab at Diaz’s record as well as the money he was making before his win over Conor McGregor.

“Another thing! U gotta say thanks to @TheNotoriousMMA his is the only reason u make money in your life Natan @NateDiaz209”

Fighter pay will continue to be major topic in the coming weeks.

However, it’s hard to see why Burns wouldn’t accept the opportunity, especially given he only moved up to welterweight in August last year.

What do you make of these recent tweets?