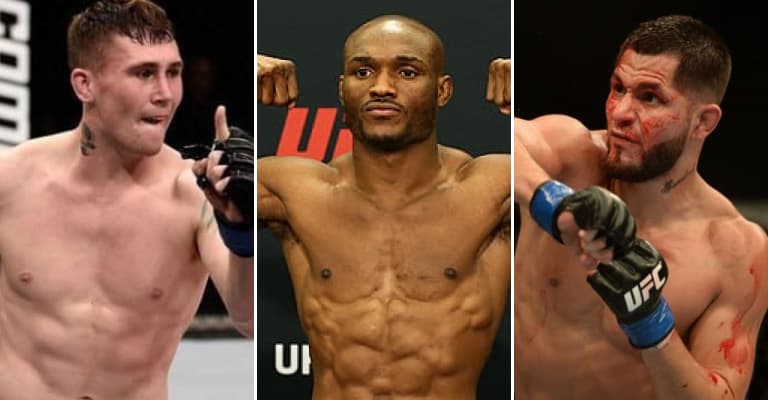 The welterweight division is an absolute shark tank these days, with numerous worthy contenders angling for a shot at Tyron Woodley’s belt.

Three of those welterweight contenders went to war on Twitter on Wednesday after an inflammatory tweet from Kamaru Usman’s manager, with Usman exchanging barbs with Darren Till and Jorge Masvidal.

Check out their war of words for yourself!

The most avoided fighter in the ufc today @USMAN84kg everyone’s talking shit but I’m talking to the matchmakers daily – masvidol said no, Magny said no, Covington said no, thompson injured, Darren till saying he wants to fight but no contracts coming through pic.twitter.com/nA1fNI7R59

I won’t get leg humped for 25 minutes. Even if he can get me down once or twice, can he keep me there? Cos when I get back up he knows I’ll fuck him up.

You're a cheap version of Connor. All this fake hype because you beat a washed up lightweight.
UFC record (4-0-1) 2 finishes 1 draw and don't forget you couldn't make weight.
Me (7-0) more 10-8 rd than you have ufc fights.

I’m sorry mate, truth is I’m scared of you! At 100% I could imagine you to be a monster so fuck that shit. I’m scared of wrestlers! And your striking is great aswell! Weird that you called out Colby after your last fight and not me tho ????????‍♂️???????????? #UsmanTheTwitterTalker

I don’t care who you beat or the fake hype on you. A win is a win but don’t start poking your bird chest out acting like you’re a savage. Don’t say you’ll fight anyone, anytime, anywhere? And try to ???? the real savage. You’ll fight some guys,some times, some places.

Usman and Till went back and forth for a while before Masvidal jumped into the fray upon seeing Ali’s tweet suggesting “Gamebread” had turned down a fight with Usman. Naturally, he didn’t hold back in classic Masvidal fashion.

You must be as 2 faced as people say you are for posting this with my name in it. Lets see I’ve agreed to fight #1 at the time Maia, #2 at the time Thompson now I’ve been offered #7 Till which I more than welcome cause it’s a dude that actually fights and doesn’t run his mouth https://t.co/yNnX9Xmawy

You sound like a little jealous #bitch @USMAN84kg that is worried about other dudes talking about you If #hotendency if Till can’t do July I’m all about the warm up fight and if you have a baby shower to attend and can’t just know the world knows you’ve been exposed https://t.co/V6PWVTYfGN

Masvidal’s manager, Ibrahim Kawa, weighed in on the matter too, claiming that Masvidal was never offered Usman, despite Ali’s tweet.

I can confirm @USMAN84kg was never offered to @GamebredFighter I don’t know which matchmaker Ali is referring to #moreFakeNews https://t.co/YgBOm4Z13J

With Usman undefeated in seven UFC appearances, the Nigerian-American has had trouble finding an opponent as of late. Till too has had issues getting a fight; the Englishman is currently slated to headline UFC Liverpool in May, however he does not have an opponent yet.

Do you agree with Usman’s manager that other fighters are ducking “The Nigerian Nightmare”? Who came out on top of this Twitter battle?