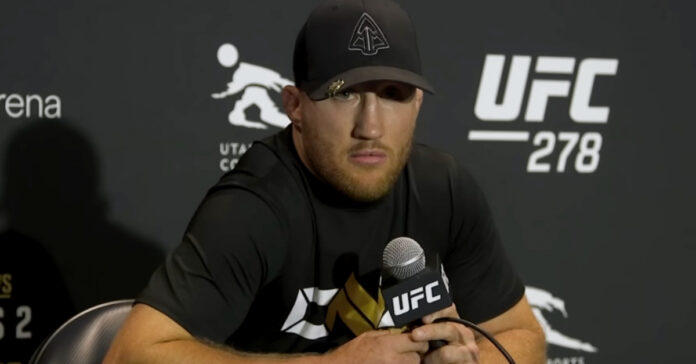 Justin Gaethje admits that Charles Oliveira is one of the hardest strikers he’s ever faced. The former interim UFC champion is confident that his former opponent will not be completely shut out by Islam Makhachev at UFC 280.

Gaethje was backstage for UFC 278, where he shared his thoughts on the upcoming lightweight title fight between Oliveira and Makhachev.

“I’m 100 percent confident that Islam will not dominate Charles and that’s about it,” Gaethje said. I don’t know how to explain it. It’s what I feel. The last time I stepped in there with him [Oliveira], there’s no way. It’s going to be a great fight…we’re all in for a treat.”

Gaethje did not give an official prediction for the fight but thinks Oliveira’s cardio will play a factor in the main event.

“I think Charles is going to move forward,  Islam is going to try, and eventually, he might be successful and if he is, he’ll win but I don’t see him [Oliveira] tiring out even if he takes him down for the first two rounds,” Gaethje said. “I don’t see Charles getting submitted and I don’t see him being too exhausted to continue to fight the fight that he needs to fight.”

The Arizona native alluded to Oliveira’s striking power during their fight in May. Gathje faced Oliveira for the lightweight title in a losing effort.

“It was a feeling I’ve never felt. Usually, you get hit and you call it a buzz, call it a flash,” Gaethje said. “This [was] more like my tongue just went on a super powerful battery and my entire body, it was crazy. It was perfect shots, perfect time. One or the other and it was the factors that I faced that night.”

Oliveira, a Brazilian jiu-jitsu black belt, is open to testing his skills against Makhachev, who is known for his elite grappling and sambo background.

“Want to start the fight on the ground? I’ll start playing guard. It won’t make any difference to me. Again, I’m telling everyone this, I’m the division’s biggest problem and you’re not understanding,” Oliveira told MMA Fighting. “I don’t care who it is and when it is. If you want to trade on the feet, come for it, I have firepower in my hands. If you want to take me down, do it.”

Makhachev has been unbeaten in his last 10 fights. The Russian native is looking to join a list of champions that represent the American Kickboxing Academy (AKA). Fighters like Daniel Cormier, Khabib Nurmagomedov, Cain Velasquez, and Luke Rockhold have all held UFC gold.

The fight between Oliveira and Makhachev at UFC 280 will determine who is the king of the 155-pound division.