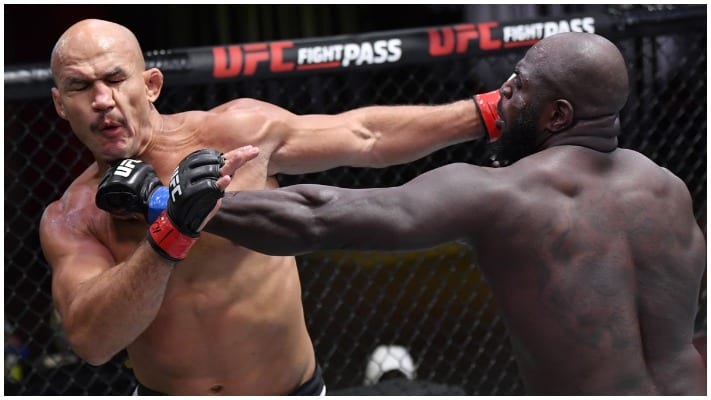 The Brazilian started the fight well using lots of movement and volume against his heavy-hitting opponent. Things went south for Dos Santos in round two when he got caught up against the fence with his hands down. Rozenstruik swarmed and finished the fight in brutal fashion on the mat.

‘JDS’ took to Instagram to give his thoughts on the fight and address his fans.

“Hey you all, I’m still sitting here at my hotel room and thinking about the fight, of course” dos Santos said on Sunday morning. “I would just like to thank all of you guys for your support, for your messages, for positive energy that you guys are always sending to me. It’s a very important part of the game, and I’m very happy to count with you guys, with your support. Thank you.

“Unfortunately, we didn’t get the result we were expecting, but I was feeling great. I was feeling ready to win. But fighting is like those surprise boxes, sometimes you get a negatively surprised by something. That’s what happened to me in the fight. I got caught, and my opponent tried to finish the fight.

“Now it’s time to wait for the dust to settle, and then think about the next step. Thank you.” (Transcribed by BJPENN.com)

Dos Santos is now on a three-fight losing streak after previously being stopped by Francis Ngannou and Curtis Blaydes. Prior to that he was on a three-fight winning streak beating Derrick Lewis, Tai Tuivasa and Blagoy Ivanov to propel himself into title contention.

Rozenstruik on the other hand got back into the win column after suffering the first defeat of his career at UFC 249. The American Top Team was savagely knocked out in 20 seconds by famed heavy hitter Ngannou back in May. He will now be confident of building momentum which had once made him the most promising prospect in the heavyweight division.

What should be next for Junior Dos Santos after this most recent loss?