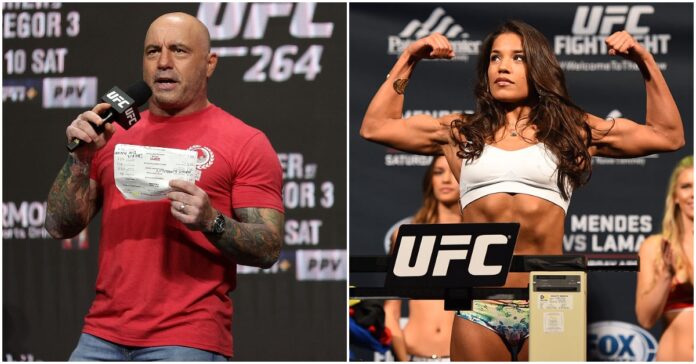 UFC Bantamweight champion Julianna Pena has come out and apologized after her comments regarding COVID were ‘misconstrued’.

The champion made a recent appearance on the JRE MMA Show in which she explained how she believed that COVID could be a conspiracy theory.

“I’m a massive conspiracy theorist on this whole thing, and I have been since the very beginning. I’m like, ‘This is just a money grab. They’re trying to kill us, and this is ridiculous,’.

“I don’t even think it’s a conspiracy anymore with all the other stuff that’s happening, it’s just like, no, this is reality.”

‘The Venezuelan Vixen’ had a chance to clarify her comments during her TUF 30 media appearance. Julianna Pena will coach the upcoming season of The Ultimate Fighter against Amanda Nunes.

“I took a little heat on that, as well. And what I mean to say is — once again, my words were a little bit misconstrued — I am tired, I am exhausted, we’re going on this pandemic two years… going on three years now. I just want things to go back to normal,” she told reporters.

“I didn’t mean to come across as insensitive, especially for the fact that I had COVID. Everybody that I know had COVID. I lost my aunt in Venezuela, I lost many people that were near and dear to me,” she explained.

“It absolutely is real. I’m just angry and frustrated and exhausted over the whole situation because I just am wanting things to go back to normal. And so, if I offended anybody by my comments on COVID, please, I would like to apologize. That was not, by any means, what I meant to say.”

However, following on from the backlash she received Julianna Pena now believes she no longer has a voice to speak out.

“Now, I feel like I can’t say how I really feel about anything because (everyone’s) just gonna find a way to make a headline. And so now I’m just… ‘Just keep it PG, Julianna.’”

The bantamweight champion also showed her support for Joe Rogan after the UFC Commentator also received serious backlash for comments, he had made himself.

“I can’t speak for Joe, I don’t know how his thoughts are. Me, still learning in the process, I think that he was trying to divert away from that when I was on the (topic) and I just kept coming right back to it and hammering it.” (Transcribed by Bloodyelbow.com)

Do you think Julianna Pena’s comments were out of line?