Julian Lane was still trash talking while being dominated on the ground by Austin Hubbard at XMMA 5.

This was Lane’s first MMA match since 2018, where he lost by rear naked choke. The former Ultimate Fighter contestant has been making his money fighting in the BKFC.

He has a record of 3-6 at BKFC and had a fantastic feud with former UFC prospect Mike Perry. In the lead to the fight, Lane was constantly talking about Perry and the things he would do to him inside the ring. He even threw a full water bottle at Perry while he was doing an interview to sell the fight. He lost in that grudge match and the two didn’t even bury the hatchet after the match.

Julian Lane is known as being a trash talker, and this was just another example

In the video you can hear Lane talking smack while being controlled.

READ MORE:  Where Is The Best Place To Bet On UFC Fights?

It’s ironic that Lane would speak on getting to the UFC and cut, when he never even made it into the promotion. Hubbard fought in the UFC 7 times in his career, most recently in August of 2021, when he lost to Vinc Pichel. Hubbard ended his UFC career with a 3-4 record, and although he had a losing record in the octagon, he at least made it to the biggest promotion in the world and even got a few wins.

What do you think of Lane talking trash while being hit with elbows? 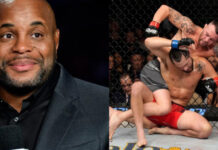 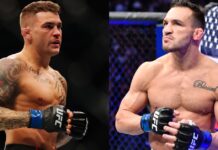 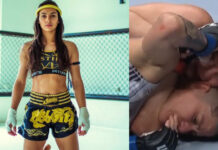