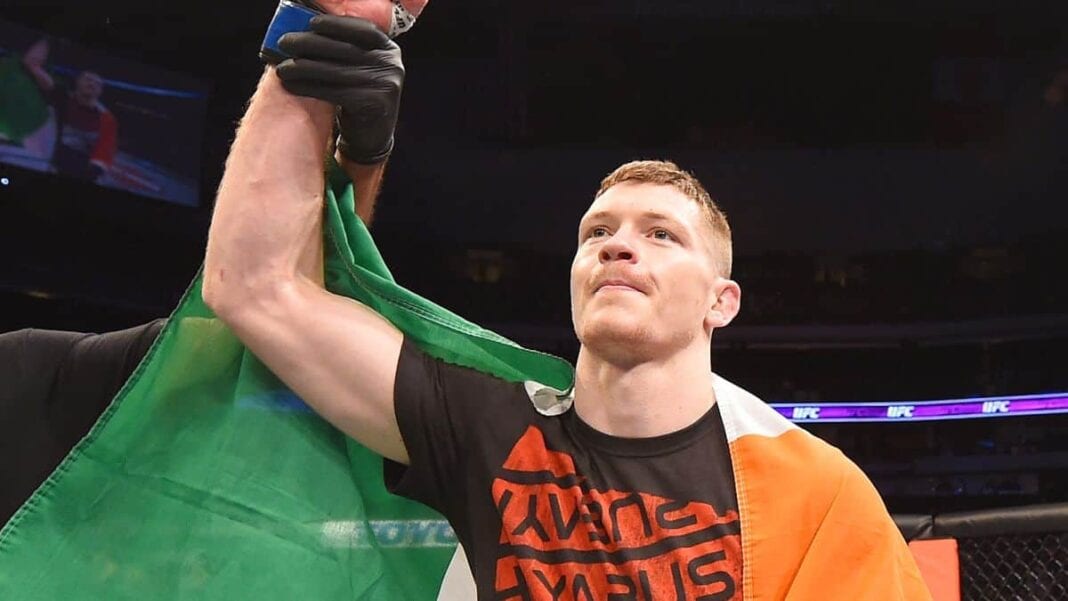 “Irish” Joe Duffy has begun to make waves as the newest addition to the so-called “Irish Takeover” in the UFC, as he has now compiled two-straight impressive wins in the Octagon. Duffy made his UFC debut in March at UFC 185, scoring a first-round head kick finish, and he added to that at yesterday’s (July 18, 2015) UFC Fight Night 72, scoring a first-round submission win over Ivan Jorge.

However, he isn’t necessarily famous for his latest wins, but rather one win he secured around five years ago under the Cage Warriors banner, and that was a win over Irish sensation and newly crowned interim UFC featherweight champion Conor McGregor. That’s right, Duffy was the last man to beat the “Notorious” one.

With McGregor’s stardom, and “Irish” Joe’s growing fan base, it seems as if fans are drooling over the idea of a good old Irish rematch at some point. However, it looks as if those fans won’t get what they want, unless McGregor moves up that is.

Duffy is currently competing in the lightweight division, and he indicated with MMAJunkie, that he will be staying at 155-pounds:

“I’m going to stay at 155,” Duffy said after his win over Jorge, which took place at SSE Hydro in Glasgow as part of the UFC’s debut in Scotland. “I’m pretty comfortable here, and I feel like I can improve a little bit. So I think this weight is perfect.”

Continuing on, Duffy noted that he’ll just continue to do his own thing, and beat whoever is put in front of him. He didn’t name an opponent who he’d like next, but “Irish” Joe unsurprisingly stated that he would like to fight on the UFC’s October card in Dublin, Ireland:

“I just quietly do my own thing,” he said. “I know in time, I’m going to keep putting in those performances and they’ll take note. That’s what we’re in the game for – we’re here to fight the top guys in the world. So whoever they put in front of me, I’ll be glad to be on that Dublin card, whoever it is. … That’s a dream come true if I headline Dublin. That’s the kind of fight I want to be in.”

Could we have another Irish contender emerging right before our eyes?