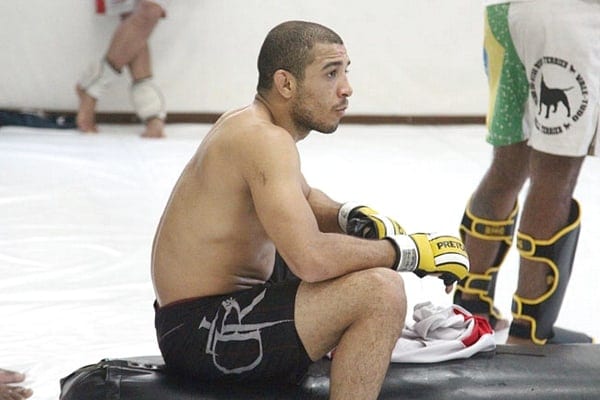 The saga of Jose Aldo’s injury is far from over, and UFC 189 on July 11th might well still see Conor McGregor vs. Chad Mendes as the main event. The whole sticky situation started when rumours swirled of the reigning featherweight champion breaking his rib in sparring. Soon quelled by the news that Aldo was still fighting at UFC 189, and that it was in fact a bruised rib, it looked as though we’d all been worrying about nothing. Well, it’s time to worry again folks.

According to Aldo’s Nova Uniao coach, Andre Pederneiras, Brazilian doctors that took a look at Junior’s rib say that it is in fact broken, with a conflicting report from American doctors who believe the ribs to be bruised. Further to that, Aldo is not allowed to train at all for the next 14 days leading up to UFC 189, and still in some doubt of making the Conor McGregor fight. As per MMAFighting:

“There’s medical report here and an evaluation there. I’m not a doctor to say which one is correct,” Pederneiras told the media after Shooto Brazil 55 in Rio de Janeiro. “I know he’s injured and this rib injury is painful. He’s using anti-inflammatory and we will wait to see if he gets better. The fight is on, and we’ll check him again next week.”

“He’s forbidden to do anything right now. If you move, the injury won’t heal, so he needs to stay to some rest. He’s used to pain but is feeling a lot of pain right now. It’s hard to fight at 100 percent. But if he can take a punch and don’t feel the pain he’s feeling right now… He broke his foot in the first round against ‘Korean Zombie’ and kept fighting. He’s used to pain. We’ll only let him fight if he’s well.”

The difference between the broken rib and the injury suffered against ‘Zombie’ is timing, and the fact he didn’t need to be medically cleared during his UFC 163 bout. The broken foot happened in-octagon, and there’s not a doctor in the world that would clear the champion to fight with a fractured rib, there’s simply too much risk involved. Punctured lungs can be a direct result of broken ribs being knocked around, and it could well lead the promotion in to more trouble than it’s worth. So when will we know?

“We will only have this answer next week,” he continued. “He’s under treatment. He did an injection and is under a PRP (platelet-rich plasma) treatment, and is waiting to get better. They take his blood, use only the good plasma, and inject it on the injury. The fight is 15 days away. Doctors say he will get better day after day. We can’t say how he will feel 15 days from now.”

“I think Aldo is so superior it won’t make the difference. If he goes to the fight, he will win,” Pederneiras said. “I won’t put him in a situation that one punch can end the fight.”

Either way Aldo’s injury will have a big sway at UFC 189; if he’s fighting in Las Vegas, there will be a direct impact from the two weeks extra training that McGregor will gain, if not then the obvious negative results need no explanation. What is a question though, is why Aldo’s team leaked the news of his injury for the world to know. Surely such information could prove gold dust to ‘The Notorious’ during the final weeks of camp?

So what of an interim title belt at UFC 189?

“The UFC is a private company and they make the decision that is better for the company,” he said. “Aldo fought in October, nine months ago. The majority of the champions who didn’t fight for any reason were out longer and they didn’t create an interim title. I don’t think it’s cool, but it’s a private company.”

It looks as though some reading between the lines is necessary at this point; Conor McGregor vs. Chad Mendes is far more likely for UFC 189 than it’s original headline booking, and with the coach already talking about how long other champs have sat out for, it’s not looking good for the Brazilian featherweight boss.

We’ll see how this pans out, but I for one am not holding my breath for the Aldo vs. McGregor bout.