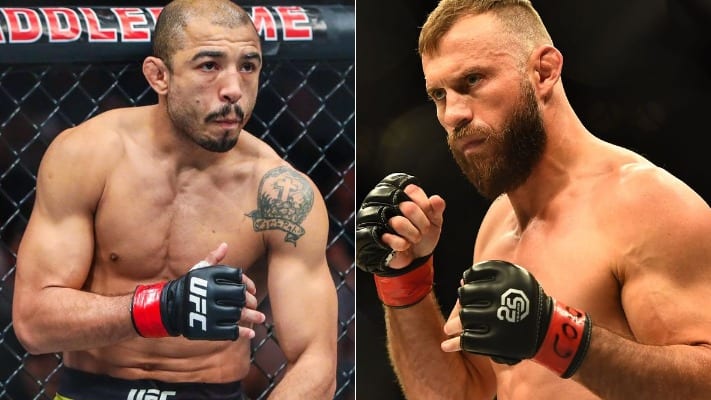 He’ll co-headline UFC on ESPN+ 2 from the Centro de Formação Olímpica do Nordeste in Fortaleza, Brazil. Aldo will be facing his fellow countryman Renato Moicano. Before that fight was made official, however, Aldo told media recently that he was offered a fight with lightweight fan favorite Donald “Cowboy” Cerrone.

However, the UFC seems to be going in a different direction with Cerrone, likely matching him up with Conor McGregor next. Instead, Aldo proposes a fight with former 155-pound champion Anthony “Showtime” Pettis (via MMA Fighting):

“This fight was very close (to happening),” Aldo said. “They offered it to us and I was really happy because we’re both aggressive fighters and it would be a big fight, but the discussion has taken another path now, he’s trying to fight Conor (McGregor) and I don’t see how this fight happens now.

“But (Anthony) Pettis would be an excellent opponent. We were close to fighting twice before and didn’t happen. Having this fight in May, at lightweight, would be even better.”

Pettis is gearing up to make his welterweight debut against former 170-pound title challenger Stephen “Wonderboy” Thompson. They’ll face off at UFC Nashville on March 23rd. Should both Pettis and Aldo emerge victorious in their next bouts, it would make for a huge dream fight between the pair.

As far as who else Aldo has on his list of potential opponents moving forward, the Brazilian said he’s down to scrap with anyone in the top-15 at 145 pounds. He also mentioned he’d fight a few lightweights, such as Dustin Poirier:

“Every ranked featherweight, down to the No. 15,” Aldo said. “I put some lightweights there as well, like Dustin Poirier and other ranked fighters. All 15 names. Take a look at the rankings and that’s pretty much my list.”