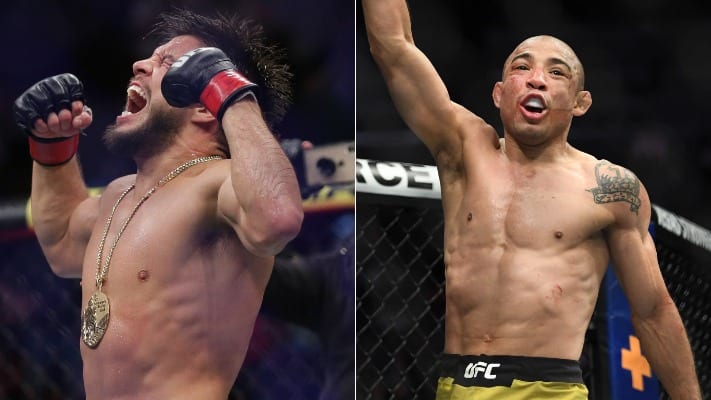 Jose Aldo is taking all the necessary precautions when it comes to training for his bantamweight title fight with Henry Cejudo.

Aldo is scheduled to challenge for Cejudo’s bantamweight title in the UFC 250 headliner on May 9 in Sao Paulo, Brazil. But given the coronavirus pandemic and the number of deaths in Sao Paulo, there is uncertainty as to whether the event will go ahead.

As of now, however, it is still on and Aldo is switching things up for his training camp to make sure there are no risks involved.

“I’ll separate a group of athletes, no more than five fighters that have been in quarantine as well, and I know they don’t have it, so they can train with me,” Aldo told MMA Fighting. “I’ve proven I don’t have it (by staying at home for two weeks). If they don’t have it either, we can train and have contact. I’ll train exclusively with that group.

“We’re all isolated. We’re in quarantine, so, when it’s over, we’ll take all the precaution needed and be able to train jiu-jitsu and spar. We’ll be able to do out normal training. The gym is closed, so we’ll open it just for us and train without risking getting contaminated or contaminating others.”

It’s not the ideal training camp but it will do given the current global situation. In fact, the former featherweight champion says he just requires one week of solid training to prepare for Cejudo.

“F***, I only need a week of training to beat Cejudo,” Aldo said. “I’m more worried about making weight than fighting him. I can be off camp, on vacation, but if you put me in the Octagon with him, I beat him with an eye closed.

“So, for me, it’s not about sparring, if I only have a month or a week to train, I beat him even if I’m not training. The only problem is the weight, so that’s why I’m eating well. I’m cool about the fight though, don’t worry about it.”

For Aldo, UFC 250 taking place ultimately depends on how UFC 249 goes. Whether it’s behind closed doors or if he has to fly out of Brazil, Aldo has no problem whatsoever as long as he gets to challenge for a second title.

And he is very confident in his chances of doing just that.

“I beat him wherever the fights goes,” he added. “Easy. I’ll knock him out fast, no doubt about it. It won’t go five rounds, brother. It won’t. No doubt. If he tries to take me down, he won’t succeed because I’ve fought better wrestlers than him. I respect his history in the Olympics, he was an Olympic champion, congratulations, hats off to him, but it’s a whole other sport. It’s completely different. He won the Olympics at 55kg (121.25 pounds) and it’s completely different from MMA.

“I’m not worried about it. I have way more jiu-jitsu than him. If he takes me to the ground, I’ll submit him even if I’m not training for a year, and if we stay on the feet, I’ll knock him out. Don’t worry, wherever the fight goes I’ll knock him out.”

What do you make of Aldo’s comments? Do you think he beats Cejudo?