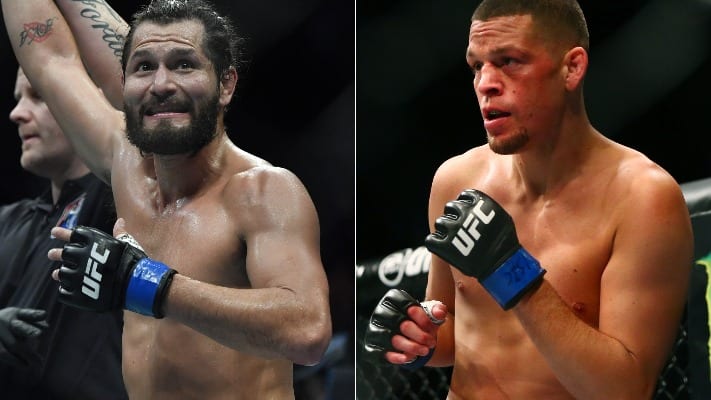 Now that Nate Diaz is sticking around at 170 pounds, which seems to be paying off for him physically, it opens up some interesting matchups for the Stockton native.

One of those matchups could be a scrap with fellow fan-favorite Jorge Masvidal. Speaking to BJPenn.com recently, Masvidal said he’d “love” to step into the cage against the former “Ultimate Fighter Season 5” (TUF 5) winner:

“Oh I definitely would love to, man, Nate’s a warrior, he’s going to get in there and fight, you know, there’s no question about it, he’s going to just fight,” Masvidal said.

“I haven’t done my homework, is [Nate] a 170-pounder or is he doing this because Pettis is just a ’55er and … and they both just agreed to fight at ’70 and not cut the weight so they could give it all in the fight night and both of them just go in there and give it what they got in the fight instead of cutting weight?

“I don’t know if Nate is a long time ‘70-pounder now or what’s happening. But if he is, if he’s staying at ‘70 and that fight gets offered me, I’d love to fight Nate.”

Masvidal and Diaz each have massive fights coming up. “”Gamebred” will be taking on Ben Askren at the UFC 239 pay-per-view (PPV) next month on July 6. The winner could very well be looking at a title opportunity next. As for Diaz, he makes his highly-anticipated return to the Octagon in August. He’ll co-headline UFC 241 opposite ex-lightweight champion Anthony “Showtime” Pettis.

Should Diaz and Masvidal emerge victorious from their respective fights, it’s not crazy to think that they could be paired up against each other next.