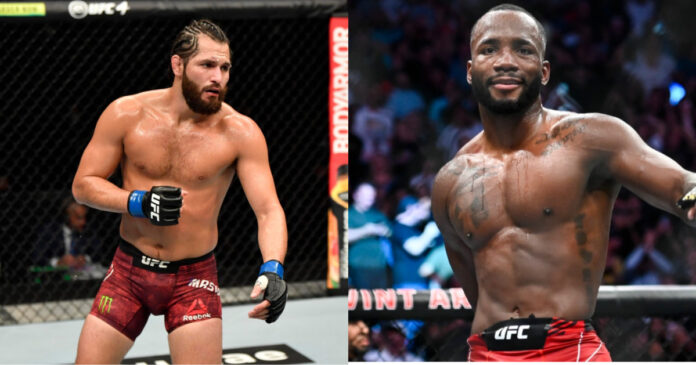 Jorge Masvidal still has his eyes on UFC gold,

Ever since their paths first crossed in 2019, Leon Edwards and Jorge Masvidal have seemingly been destined to fight. The initial incident, which would spark the infamous ‘three-piece and a soda’ line synonymous with Masvidal’s meteoric rise, started a three-and-a-half-year feud which shows no sign of disappearing.

It was Masvidal who was the next big thing back in 2019, with newly found fame the Miami native would not have to fight the relatively unknown Edwards, instead being presented with lucrative fights with the likes of Nate Diaz.

Times have changed though, Edward’s is currently the reigning 170lbs after dethroning Kamaru Usman back in September and now everybody wants a piece.

Following the big upset, many top welterweights presented their case for a title shot and Masvidal has been no different. Talking to MMAFighting, Masvidal would goadingly say how he thinks Edwards is backing out of their fight.

“Leon, f****** step up to the plate, bro. You begged and cried and did all this bulls*** before when I was fighting for the titles. Now you got the belt, let’s go.

“And I never dodged this fucker, cause when I wasn’t fighting Leon I was fighting the guy that ha the belt and then after that I fought the guy that’s No.1. so if Leon wants it, I’m here man.”

It wouldn’t take long for ‘Rocky’ to respond, tweeting out a message to Masvidal hours later.

Do you wan to see Jorge Masvidal Vs. Leon Edwards?