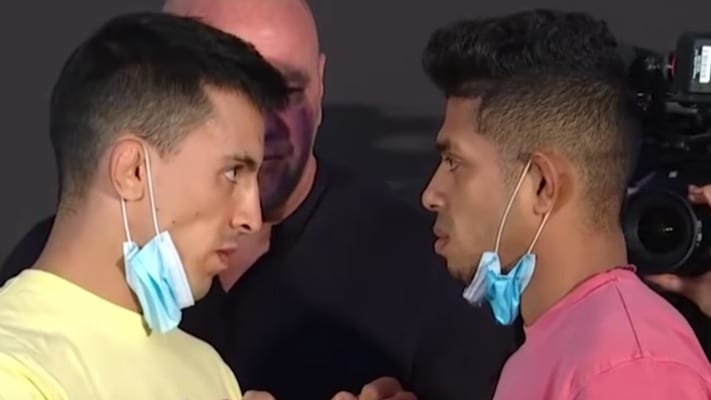 Kicking off the UFC Fight Island 6 main card is a bantamweight bout between Thomas Almeida and Jonathan Martinez.

Round 2: Again, Almeida starts things off with some leg kicks. Martinez lands a left hand after a head kick was blocked. Almeida attempts a takedown but it’s telegraphed and Martinez defends easily. They return to striking. Almeida lands a nice body kick. Martinez continues to land a stinging jab. Both fighters collide at the same time with shots and Martinez gets dropped but gets to his feet right away. Martinez lands a huge left hook and follows it with a body kick. Almeida blitzes forward and connects with a left hook. The round comes to an end.

Round 3: They clinch up and Martinez knees Almeida to the stomach as they separate. Martinez lands a body kick. Almeida responds with a body shot. Almeida lands a nice left hook. Almeida looks to blitz again but Martinez responds with a huge left hook of his own. Martinez counters with a left hook again and this time, it seems to have hurt Almeida who backs away. He seems to have recovered quickly, however. Martinez lands a big leg kick. Almeida lands a big left now. Martinez’s head kick is blocked but he follows it up with a leg kick. Both fighters connect with strikes in close exchanges but they remain unaffected. Almeida sees another takedown attempt defended. They connect on each other with another exchange. And another Almeida takedown attempt is defended as the fight comes to a n end.