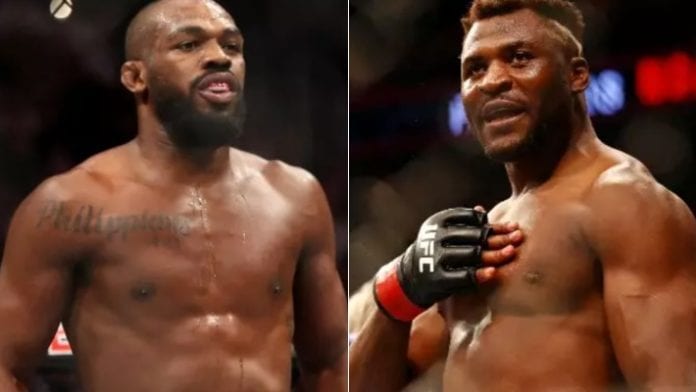 The heavyweight title changed hands at UFC 260 after knockout artist Francis Ngannou took out the champion Stipe Miocic by knockout in the second round.

Following this victory, it’s no secret who will be next for the newly minted champion with former light-heavyweight champion Jon Jones waiting in the wings for his shot at becoming a two-division champion.

After the fight Jones took to Twitter to share his immediate reaction simply posting “Show me the money”.

Originally, Jones requested a bout with Ngannou back in 2020 after he chose to vacate the light-heavyweight title, however, the UFC and Jones were unable to agree on the financial specifics to finalize the bout.

Despite this, both fighters were willing to take the fight and since claiming the title Ngannou still holds that sentiment confirming that the fight is what he wants next and calling jones the greatest of all time in his post-fight interview at UFC 260.

The last time Jones stepped into the octagon was in February of 2020 when he took on Dominick Reyes to defend his light-heavyweight title. At this time Reyes was undefeated and put up a commendable effort to beat the champ, however, he fell short losing out on the judge’s scorecards.

This knockout victory against Miocic puts Ngannou on a five fight winning streak with all victories coming via knockout.

After taking his first career loss to Miocic in 2018, Ngannou returned and suffered a second defeat in a lackluster fight with Derrick Lewis. Following these setbacks, Ngannou went back to what we had seen previously stringing together back-to-back finishes.

Having an almost perfect record, with his only loss coming via DQ, Jones has never been finished before inside the octagon so it remains to be seen if this power-punching heavyweight champion can be the first fighter to do so.

Who do you think wins in a bout between Jones and Ngannou?