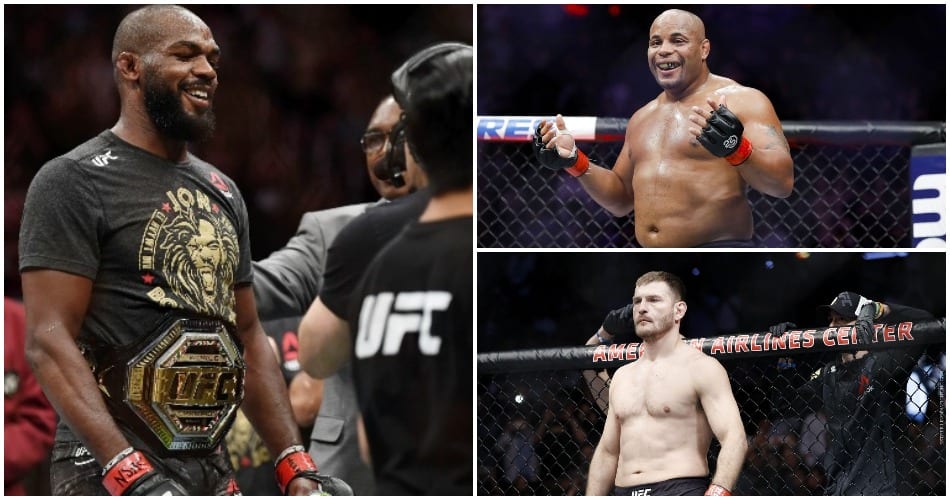 Jones defended his title following a split decision victory over Thiago Santos in the main event of UFC 239 on Saturday night. Much of the narrative heading into the fight was whether Jones would face Cormier in a trilogy fight afterwards. In order for that to happen, Cormier needs to defeat Stipe Miocic when they meet in the UFC 241 headliner on August 17.

Should that occur, Jones is more than willing to face Cormier again:

“Absolutely (I would fight Cormier again),” Jones told reporters following UFC 239. “Me and Daniel, we’re both speaking the same thing. It’s going to be a super fight, and the only reason why it hasn’t happened is, I think, the UFC’s scheduling.

“When the UFC’s ready for the fight, they know they have two guys who are willing and able and they’ll approach us and they’ll say, ‘Hey, this is what he’s going to get paid’ and Daniel will be happy.”

That’s not to say Jones won’t face Miocic if he comes out on top. Having previously teased a fight between themselves, “Bones” is open to facing Miocic as well:

“Yeah, absolutely I’d be willing to fight Stipe, as well,” Jones added. “I’d rather fight Daniel because I feel like I have his recipe, but I’d fight Stipe, too.”

Do you think Jones will go to heavyweight next? If so, do you prefer him facing Cormier or Miocic?