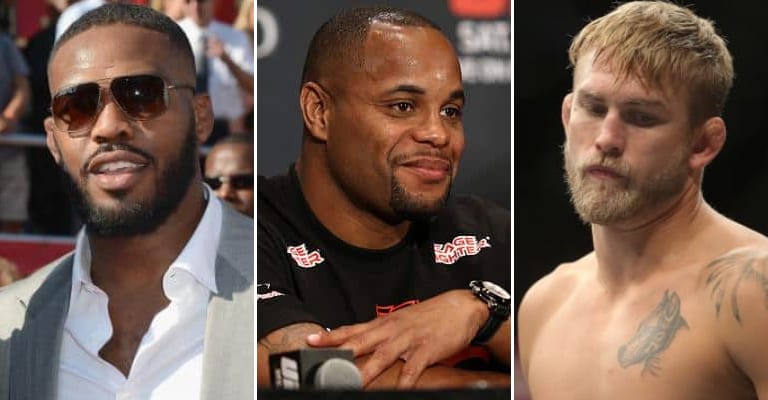 Although the UFC’s light heavyweight title is currently on hold as champion Daniel Cormier meets heavyweight champion Stipe Miocic in the main event of July 7’s UFC 226, that hasn’t stopped the top fighters at 205 pounds from remaining active online and spewing smack talk at one another.

The latest round in a seemingly never-ending saga between Cormier, legendary but troubled former champion Jon Jones, and perennial top contender Alexander Gustafsson was riled up when Gustafsson revealed he had signed a lucrative new contract with the UFC.

Announcing the deal, ‘The Mauler’ threw a bit of shade at the aging Cormier, suggesting he was ready to fight while Cormier was discussing retirement:

But even though Gustafsson talked a big game and suggested Cormier was the one soon to quit, ‘DC’s’ been the far more active fighter than the towering Swede, who has fought only five times since his historic loss to Jones at 2013’s UFC 165.

Cormier has fought twice as much as ‘The Mauler’ in that timeframe, including a split decision victory over Gustafsson at UFC 192 in 2015 for one of his three title defenses of the 205-pound belt. So even though that fight and Gustafsson’s match-up with Jones went down to the wire, Gustafsson is largely known for his two closest losses, something “DC” brutally pointed out on Twitter while urging “Gus” to quit talking on social media and go fight:

Alex, what exactly have you accomplished in your career? I’ve earned the right to retire on top. Your greatest accomplishment is two close losses. Congrats on the new contract, now go fight. It’s been two years. Enough with the social media. #gofight https://t.co/Uf2LJ31ALE

Finally, in a reaction that may have been a bit unexpected (or may not at all), Jones chimed in tonight by saying that even though he didn’t like Cormier, Gustafsson should bring the ‘tough guy’ act to the championship rounds when fighting the best at 205:

Arguably the greatest fighter in MMA history and almost definitely the best light heavyweight to fight in the UFC (at least by the numbers), Jones was almost assuredly on the way to becoming the most dominant to set foot in the octagon before a long, concerning series of outside-the-cage incidents involving all sorts of drugs both recreational and performance-enhancing derailed his otherwise decorated career as he continues playing the victim.

‘Bones” latest comeback was at last July’s UFC 214, where he knocked out Cormier in the third round of their awaited rematch to take back the throne most felt was rightly his anyway. Yet he ruined the emphatic return by testing positive for anabolic steroid Turinabol and is currently facing punishment for his second PED-related offense from USADA after essentially claiming that he just didn’t know how the steroids got into his system in a previous hearing in front of the California State Athletic Commission (CSAC).

Jones could be suspended for quite some time; however, he’s still the only man to defeat Cormier and Gustafsson, and he could somehow return for yet another comeback sooner than we think. He could also just as easily stay on the sidelines as the most shocking, cautionary tale of wasted talent in MMA history as well.

Either way, he’s not going to let his former  – and possibly future – rivals get away with generating some heat without him being involved.