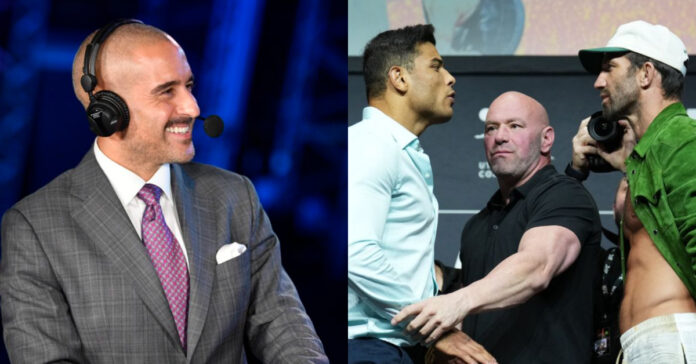 Ahead of one of the more anticipated cards of the year, Jon Anik revealed he could see a world where a victory over Paulo Costa at UFC 278 is enough to earn the returning Luke Rockhold a title shot. A sentiment that Rockhold shares himself.

Having not competed inside the octagon since 2019, Rockhold will be looking to propel himself back into the winning column as well as title contention if he can best ‘Borrachinha’ at UFC 278. Rockhold returns to the octagon on the back of two defeats at the hands of Yoel Romero and former light-heavyweight champion Jan Blachowicz.

Speaking to MMA Fighting,  Jon Anik revealed he could see a world where the former middleweight champion earns himself a shot at the title he once held with an impressive performance over the 6th-ranked middleweight Paulo Costa.

“It’s a great question and there’s no doubt about it, certainly Adesanya has business to attend to with Alex Pereira, and it’s not out of the realm of possibility that those guys fight twice in a row if Alex is able to get him. There’s a lot of different balls in the air, but absolutely [Rockhold can earn a title shot].”

“Izzy is a champion that wants the stiffest challenges, and two names that he wants on his resumé, on his Wikipedia page with green stripes is Darren Till — a name he’s injected in the mix every chance he gets — and Luke Rockhold as a former undisputed champion, and a guy in Luke Rockhold that a lot of us put on a pedestal, and who a lot of us projected to be one of the greatest middleweight champions of all-time. He didn’t defend the belt successfully a singular time, but in terms of potential for greatness, I think some people would argue it’s still engrained in Luke Rockhold.

“It would absolutely be an appetizing fight — not just promotionally, but for the champion as well.”

Both men will be looking to snap a two-fight losing streak when they enter the octagon and despite having not competed since his KO loss to Blachowicz Anik believes the pressure is firmly on Paulo Costa ahead of this middleweight clash given it is the final fight on the Brazilians contract.

“There’s so much pressure on both of these athletes big picture,” Jon Anik told MMA Fighting.

“Luke Rockhold is 37, so the time really has to be now, even though he’s the guy — unlike Paulo Costa — who has the UFC undisputed championship belt on the mantle at home. This is very interesting because both guys have lost two consecutive fights, and I think you can argue that Paulo Costa has underachieved a little bit relative to the expectations coming in — even though he’s just getting going in a lot of respects, when it comes to his career, the championship performance against Adesanya was very underwhelming, and obviously, the follow-up act against Marvin Vettori wasn’t great either.

“I think there’s an avalanche of pressure on Paulo Costa as the more primed, and primal athlete right now to get the job done and try to prove that he’s somebody they can really count on to carry the torch for Brazil and this middleweight division.”

There’s immense pressure on both fighters to succeed, but when it comes to the questions being asked in regards to this highly anticipated matchup, the longtime lead voice of the UFC feels that the most glaring questions are towards the Rockhold side of things.

“With Rockhold, I don’t really know what we’re getting,” Jon Anik said. “If social media is an indicator, then clearly the hay is in the barn, a lot of hard work has been done on the strength and conditioning side. You see in terms of Rockhold’s physical recovery, he has put a lot of resources and finances into making sure that he is ready to go.

“Some people will tell you that chins never recover. I don’t know if that’s necessarily the case, but where is Luke Rockhold’s chin? What is his ability to take a shot from Paulo Costa?”

“I think that’s the rub for a lot of people in this fight: if Luke Rockhold can take a shot or two, work his game, and potentially creating some grappling transitions because we know how good he is on top with his ground and pound, we’ll see. I just don’t know where Rockhold is at mentally, and where his chin is physically. I just feel like there’s a lot more variables on the Rockhold side and that’s why he’s a +250 [or higher] as the betting underdog this weekend. I can’t wait for that fight.” (Transcribed by MMAFighting).

Do you agree with Jon Anik’s comments?