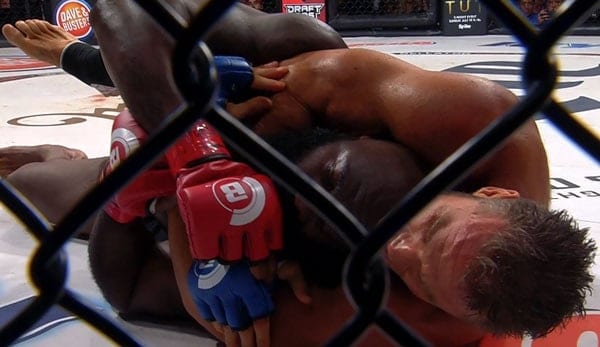 The discussions have ranged from it being outright fixed to a certain UFC personality agreeing with that assessment to it simply just being an all-out terrible fight. And even though the fight and promotion have been thoroughly raked over the coals for the cheese factor present at the event, the overall goal was accomplished when the event came by with the promotion’s biggest-ever ratings by far.

There was also another theory that said Slice tapped out when he was in an early rear-naked choke from Shamrock, only to be incorrectly allowed to ‘persevere’ and stop ‘The World’s Most Dangerous Man’ with a right hand to the dome. Some felt with that referee John McCarthy should have seen that and stopped the fight, but ‘Big John’ told Ariel Helwani that assessment simply isn’t true.

Apparently ‘Big John’ made his normal rounds to discuss the fight with both fighters. During that talk, Slice told him he wouldn’t tap. McCarthy said he then told him when he would stop the fight:

“So, I went over what would make me stop the fight.”

McCarthy described how what Slice did was not considered a tap to him, but rather a fighter who was close to giving up but instead decided to fight through a hold:

“His hands came out during the choke, but he would have had to have made more of a continuous motion for me to say he was tapping,” McCarthy said. “In my opinion, that was a fighter contemplating tapping and then working through it.”

Slice wasn’t going to tap in McCarthy’s eyes, so what he did wasn’t considered to be that action. Whether or not you agree with that doesn’t really matter at this point, however, as the carnival-like spectacle of Slice vs. Shamrock has came and went.

It has, is, and will be lambasted for days, weeks, months, and even years to come, but once again, we’re all talking about Bellator MMA on an otherwise slow Monday for MMA.

And that’s a whole hell of a lot more than we could say about it when Bjorn Rebney was at the helm.