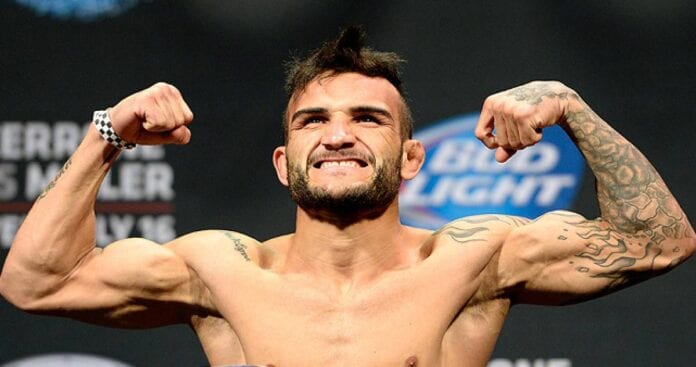 Despite being one of the most feared men in the UFC’s flyweight division, John “Hands of Stone” Lineker was recently forced to move back up to bantamweight after struggling to meet the 125-pound flyweight limit numerous times.

Lineker met bantamweight veteran Francisco Rivera at September 5’s UFC 191 in a tremendous, yet quick back, and forth affair that ultimately saw “Hands of Stone” secure a submission victory. Apparently the Brazilian slugger was surprised at how strong he felt at 135-pounds:

“I felt strong in this ‘new old’ division,” Lineker told MMAFighting.com. “I thought I would be weak compared to the other bantamweights in the UFC, but I felt pretty well.”

Lineker also stated that he planned on tiring Rivera out, but that obviously didn’t pan out, as the fight lasted nearly two minutes. Lineker attributes this to the power in his left hand:

“That wasn’t my strategy, actually, but I believe a lot in my left hand,” Lineker said. “I know that when it lands, it rocks you, so I went for it. My original strategy was to tire him out in the fence in the first round, but my hand landed and I changed my strategy.”

With his return to the 135-pound division a success, Lineker is now hoping for a top ranked fighter next, as he believes that he’s not too far away from a shot at UFC gold:

“I hope my next fight is against a top 5,” he said. “I won’t pick and choose, but I hope they give me a top 5 so I can get closer to the bantamweight title. One or two more intense wins like this last one, and I think they could give me a title shot.”

The Brazilian also plans on fighting more often now that he has to shed less weight leading up to a fight:

“I still cut a lot of weight to fight at bantamweight, but it’s not like it used to be before,” Lineker said. “I believe I can fight more often now. I had to wait five months between fights to make 125 pounds, so I can fight more now that I’m at 135.”

The bantamweight division is undoubtedly lacking contenders, but the title will be on the line this January in a highly anticipated bout between current champion TJ Dillashaw, and former divisional kingpin Dominick Cruz.

Cruz never technically lost his title, and he and Dillashaw are considered to be two of the best in the world, but “Hands of Stone” believes that he’d be able to finish each man:

“For sure,” Lineker said when asked if he believes he could knock both Dillashaw and Cruz out. “They move a lot, but that’s not a problem. They would have to get closer to hit me, and once you get closer, I’m hitting you back. I would not hunt them down, I would let them come.”

Is Lineker a future title contender?