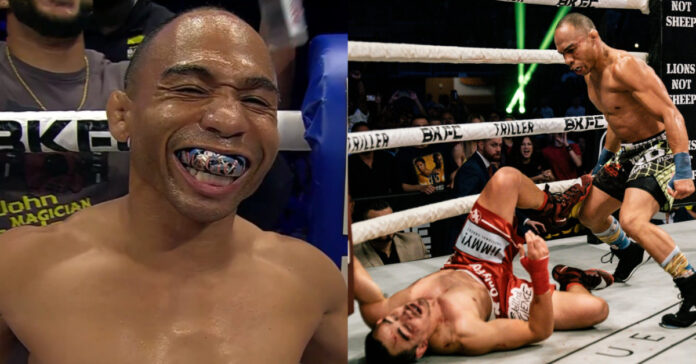 In the co-main event of the evening, he faced another former UFC standout Ryan Benoit. As the two debutants toed the line, John Dodson came flying off the scratch line with his signature speed on display. In the end, it only took ‘The Magician’ 40 seconds to finish Benoit in spectacular fashion.

“I told you I was sacrificing these hands non-stop to go ahead and get that victory and I made sure I stayed true to my promise. I went out there and I wasn’t a liar. Everyone kept sitting there going, ‘Well, I don’t know if Dodson’s still got it.’ I showed on Saturday night that I did. I went out there with a very tough opponent who’s seasoned, but as he stepped into the squared circle, I almost called the outcome. My bad. [His] acceptance to that squared circle with me… He realized I was a different breed. A different animal and I showcased why I’m one of the most violent individuals in the world. Not just BKFC, Not just UFC. Just in the world.”

John Dodson was also asked bout the conditions of his hands after his first foray into the world of bare-knuckle boxing.

“So, my hands are fine, they’re just a little swollen. You can see my little left one has a little nub on it, but that’s about it.”

Earlier in the evening, John Dodson’s younger brother Eric Dodson made his BKFC debut against Nick Villar. It only took the younger Dodson 23-seconds to dispatch his opponent in what would be crowned the Knockout of the Night for BKFC 28.

“Well, one of my anxiety and my nerves were off the chain because of the fact that my brother was fighting first, so I had to go corner him. It’s an uncontrollable animal that I know people always like to sit and they’re saying, ‘Oh, yeah, you’re always so cool, calm, collected.’ I was nervous. I was like… Had butterflies [in] my stomach and I watched him go out there and perform and I was like, ‘Oh, hell yeah.’ He’s going out there, got a 23-second knockout. Not only was it a knockout, it was knockout of the night for BKFC. He came out there, did his thing. He looked at me and he said, ‘Hey, you gotta go and beat my time of 23-seconds.”

It took the brothers a combined 63 seconds to secure victories over their respective opponents. Talking about his future with BKFC, John Dodson says that he hopes to fight again before the end of the year, but is open to taking another MMA bout if nobody steps up to face him inside the squared circle.

“My plan is to hopefully… I can fight before the end of the year. I can fight BKFC [or] MMA. Anybody who’s chomping at the bit, who just saw me perform like I did. Everybody pretty much realized the value of what I still got. It’s not like I’m sitting there wondering as if I Anderson Silva where I could possibly be doing something… Fighting somebody that was over the hill as in Vitor Belfort. Belfort was [nothing] less than amazing in his career, but I’m still in my prime. I’m still sitting there my thing and I’m making sure I can make waves from here on out.”