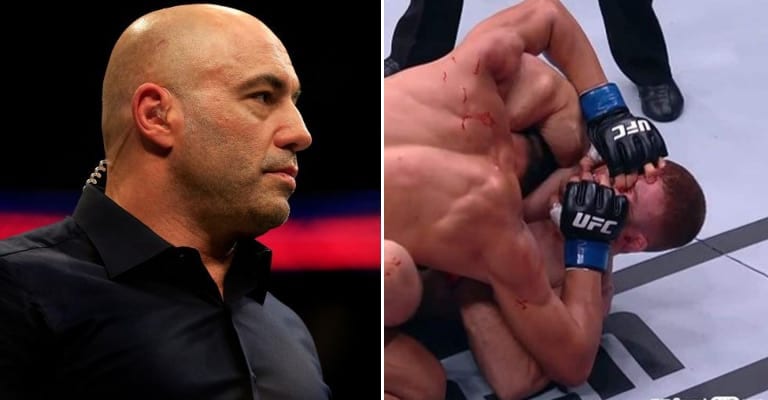 Although it was a back-and-forth bout worthy enough to win UFC 221’s ‘Fight of the Night’ in Perth, Australia, last weekend (Sat., Feb. 10, 2018), the welterweight match-up between Jake Matthews and Li Jingliang was marred by a blatant eye gouge from Jingliang that many felt should have disqualified him – let alone allow him to be rewarded for it with a post-fight bonus bonus.

But not even a point was taken away from “The Leech,’ leading to a justified outcry from many MMA fans. Earlier this week, Octagon commentator Joe Rogan joined those legions, blasting the officiating during the most recent episode of The JRE MMA Show (transcribed by MMA Junkie). To Rogan, Jingliang’s eye poke was downright cheating:

“I thought it was f-cking bullsh-t,” Rogan said. “You can’t let a guy get away with that, or he’s going to do it again. … You don’t do it that way. You tap. It’s straight up cheating; it’s not just shady. It’s cheating.

“They should tell him, ‘If this ever happens again, if you ever think you’re going to do this again, we’re going to kick you out of the league.’ You can’t do that. You can’t gouge someone’s eye when they’re choking you.”

Several fighters have been permanently injured by far less egregious fouls, and Matthews sported what looked like a significant cut despite holding no ill will towards Jingliang, who he thought merely acted in the heat of the moment.

But he may not have brushed the blatant foul off so easily if he had lost the fight, something that was a possibility once Jingliang escaped a potentially fight-ending guillotine choke with the gross infraction.

Because of that, most felt a point should have been deducted at the very least, but the referee instead brushed Jingliang’s fingers nonchalantly, leading to some justifiable outrage. Due to the referee’s perceived incompetence, Rogan said the official should be suspended or fined and unable to referee any longer because a fighter’s vision could be lost:

“It felt like the fingers were in long enough for him to know the fingers were in there,” Rogan said. “The referee f-cked up. The UFC should do something. Someone should do something. Maybe, even in Nevada? You’ve got to look at that and go, ‘Hey man, you can’t ever do this again. And we have to fine you. You should be suspended, and if you ever do this again, you’re out.’ You can’t gouge someone’s eyes. They’ll lose their vision. We can’t have any leniency whatsoever toward intentional eye-gouging. Zero.”

In his opinion, even an unintentional eye gouge should involve the point, but one so obvious and intentional is clearly grounds for disqualification:

“Every time an eye-poke happens, whether it’s intentional or not, take a point away,” Rogan said. “I think it’s a good move. Eye-gouges like that, I think is grounds for disqualification. You can’t allow any room for that. Guys are going to get blind. It could happen. Most guys are completely ethical and would never think of doing this.”