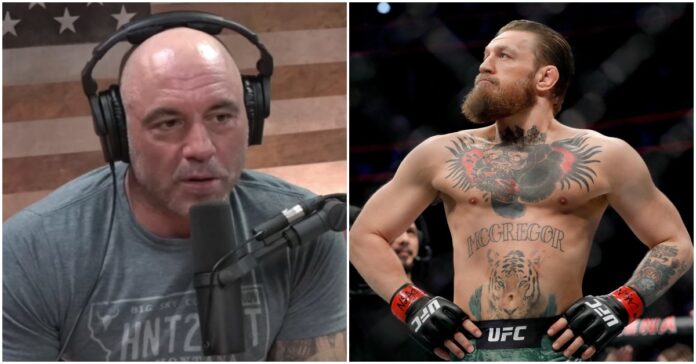 Joe Rogan believes Conor McGregor will be fighting for the lightweight title when he returns from injury.

McGregor has been adamant over the last few weeks that he will be fighting whoever has ownership of the lightweight title come the Irishmen’s return. Current lightweight champion Charles Oliveira has even expressed his own interest in a potential matchup with McGregor. Now Joe Rogan believes this could happen after speaking on his podcast with Michael Bisping.

There is no doubt Conor McGregor is the biggest name in combat sports and undoubtedly bring a great deal of attention to the UFC so it would come as a surprise if McGregor did get his wish. UFC president Dana White played down the idea of McGregor getting the next shot as he is still side-lined with his injury but reminded followers of the sport that if it bothers you that much what McGregor is doing upon his return “you’re a f*cking idiot too”.

“The problem is, every time I do a f*cking interview, all anybody wants to ask is, ‘You think Conor McGregor will get a f*cking title shot?’ That’s all they f*cking ask,” “So, I’m gonna say, ‘Well Conor McGregor isn’t anywhere near coming back yet, so I don’t know, let’s see what happens…’ It’s a dumb f*cking question for the media to ask, but the media asks dumb f*cking sh*t all day, every day. That’s what happens. And anybody who’s p*ssed off because Conor might f*cking get (a title shot), you’re a f*cking idiot too. If that p*sses you off, Jesus Christ. Calm down, buddy.”

Joe Rogan fancies McGregor’s chances if he were to face up against Charles Oliveira due to his punching power.

“Ireland would have a parade that might last a month-long,” Rogan said. “Listen, if Conor connects on anyone’s mug, you never know, what Firas Zahabi calls it, the touch of death.” (Transcribed by bjpenn.com)

Do you think Conor McGregor will get the next lightweight title shot?