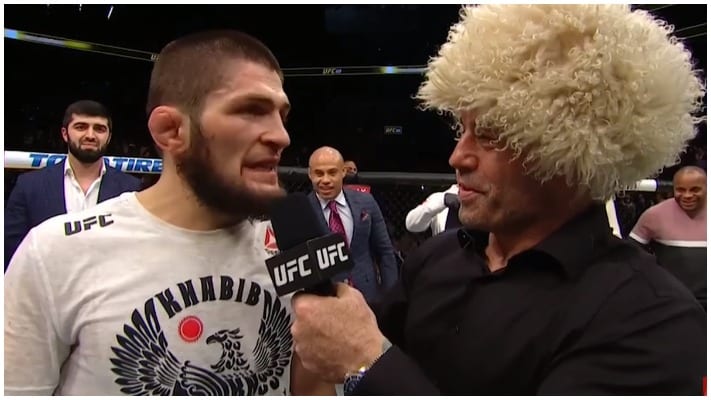 UFC commentator and popular podcaster Joe Rogan has expressed his belief that current lightweight king Khabib Nurmagomedov is the biggest draw in all of combat sports. Rogan explained that Nurmagomedov’s dominance inside the Octagon helps surpass brash-talking Irishman Conor McGregor and even boxing superstar Saul ‘Canelo’ Alvarez as the biggest star in fighting.

“Well Khabib Nurmagomedov is the biggest draw in combat sports and he doesn’t do any trash talk,” Rogan said on a recent episode of his podcast. “When you have a guy who’s 29-0 and really smashed everybody in front of them, you always wonder who’s going to solve that riddle. Justin [Gaethje] came real close with those leg kicks. He was really f***ing up his leg, but Khabib figured out a way to get the fight to the ground. Almost finished at the end of the first round and then got him in the second round.”

Nurmagomedov announced his retirement from MMA in the aftermath of his win over Gaethje at UFC 254 in October. The undefeated Russian has since doubled down on his retirement claim, but UFC boss Dana White is set to try to convince his 155lb star to return for at least one more match-up.

A fight between ‘The Eagle’ and welterweight legend Georges St-Pierre has been talked about but appears unlikely – ‘GSP’ has not fought since beating Michael Bisping to claim middleweight gold at UFC 217 three years ago.

Do you agree with Joe Rogan? Is Khabib Nurmagomedov the biggest draw in combat sports?