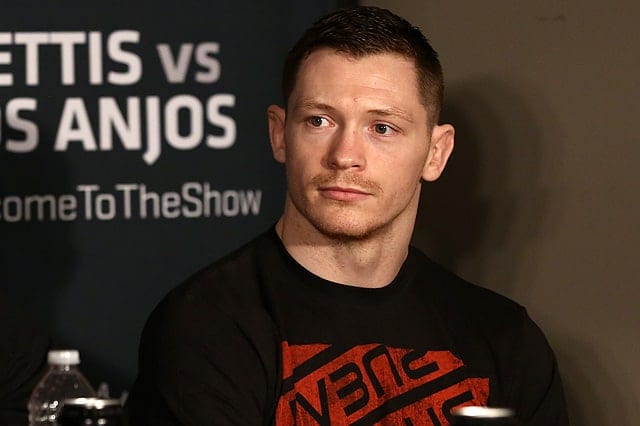 Joe Duffy debuted in the UFC earlier this year with a TKO win over Jake Lindsey, adding to the hype that surrounded him following a 2010 win over current interim featherweight champion Conor McGregor. ‘Irish Joe’ then followed up with a win over Ivan Jorge in Glasgow at UFC Fight Night 72. The win put’s Duffy’s tally at 14-1, he was an unbeaten amateur MMA fighter, and also undefeated during a seven-fight stint as a professional boxer. A ‘Jack of all trades’, and now headlining UFC Fight Night 77 after just two fights under the Zuffa banner.

It’s a bug step up in competition at the October 25th Dublin-based card, and a big statement of the UFC’s belief in Duffy at such an early stage in his promotional tenure. Speaking with Fightland.Vice.com, ‘Irish Joe’ discusses his rapid rise to a main event slot:

“I suppose these main event slots are what we are working towards, but it’s pretty spectacular this has happened so quickly. I really didn’t think it would be this fast. To be honest, I expected to co-main event coming off the win in Glasgow. That wouldn’t have surprised me, but I’m delighted to be the main event.

“It’s crazy to think I’ll be in that arena,” he says pointing back to the building behind him, “but you kind of have to believe that you’re going to be in these situations. I just didn’t expect it to be this quick,”

Another Irish sensation who was headlining cards in to time is Duffy’s former opponent ‘The Notorious’. It’s ironic that both ‘Irish’ and McGregor have faced Poirier at equally significant points in their careers, but also ironic given the fact that one is much more outspoken than the other. Duffy says that it’s the back of his Mother’s hand that still keeps him in line:

“This is just who I am. What you see is what you get. I don’t have to change a lot to do this media stuff, I just go about my business as I am and do my own thing. I think half of it is down to my traditional martial arts up bringing, but I think my mother would give me the back of her hand if she heard me being a bit cheeky or anything like that,”

Duffy has an edge in the striking against most of his opponents, and a silky smooth style that makes him very elusive. His time in pro boxing is what Duffy sees as the key difference, and he believes that head movement is what will help him in beating Poirier in Ireland:

“It’s definitely going to be difficult for these guys to figure out my style. There are not a lot of guys that have taken the time out to pursue boxing. I’ve taken two years out to fight in professional boxing.

“The style I use is slightly different than what these guys are used to, so I think Dustin Poirier is going to struggle to find someone with that same experience. Another thing I think he will struggle with is having someone in front of him that is not going to rehearse combinations. Every time I’m in there I’m reacting to the situation, whatever gaps he gives me are the ones that I’m going to take.

“The thing with head movement is, a lot of people haven’t been shown any different. Maybe they don’t have the confidence to pull it off having not been shown it before. I’ve spent a lot of time drilling this stuff when I was boxing and I think them basics are the key. If someone can’t hit you, they’re in for a long night,”

We’ll see how things pan out for ‘Irish Joe’, as he faces a resurgent Dustin Poirier at UFC Fight Night 77. Duffy will have the home field advantage, but ‘Diamond’ has looked solid since his return to 155 pounds, making this bout all the more interesting.