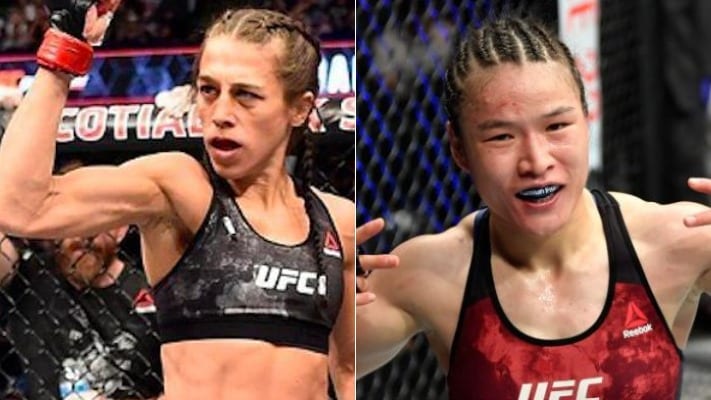 While the MMA world collectively awaits their rematch, Joanna Jedrzejczyk thinks Zhang Weili might not want it to happen.

Jedrzejczyk and Zhang met in the co-main event of UFC 248, with the latter’s strawweight championship on the line. The two engaged in a back-and-forth war that was instantly viewed as a ‘Fight of the Year’ contender as soon as the final horn sounded. Many consider it the greatest women’s MMA bout of all-time, solidifying Zhang as a legitimate champion and reinforcing Jedrzejczyk as one of the sports most electrifying competitors.

In the 10 months since, neither women has stepped back into the octagon. It is widely believed Zhang is awaiting a match-up against Rose Namajunas, while Jedrzejczyk has spent the time recovering and relaxing at her home in Poland. Given how close their first encounter was, fans have been hoping for an eventual rematch between the two at some point down the line. In an interview with SCMP MMA, Jedrzejczyk expressed some doubt over Zhang’s willingness to make it happen (H/T BJPenn).

“Maybe she doesn’t want to face me,” Jedrzejczyk said in response to why she thinks the UFC didn’t book an instant rematch with Zhang. “She doesn’t want to fight me? But she beat me… so there are going to be people saying, ‘Oh, but you got beat up,’ but this fight was so close, man. If [I didn’t have the] hematoma, it could be different. But no, it’s okay.”

“I will be more than happy to see Rose facing Weili Zhang. Maybe Rose will win this time. I’m staying patient.”

Jedrzejczyk finds herself on a 2-4 stretch, after starting her career 14-0. However, all of her career losses have come in UFC title fights – twice to Namajunas, the loss to Zhang, and a loss up a weight class against Valentina Shevchenko for the flyweight championship. Zhang, on the other hand, saw her winning streak extended to 21 fights after the decision over Jedrzejczyk.

What do you think about Joanna Jedrzejczyk‘s comments? Is Zhang avoiding a rematch?