Rose Namajunas shocked the mixed martial arts (MMA) world this past weekend (Sat. November 4, 2017) when she knocked out Joanna Jedrzejczyk to capture the UFC 115-pound championship.

“”Joanna Champion” took to The MMA Hour with Ariel Helwani earlier today (Mon. November 6, 2017) and was adamant that she didn’t tap out to Namajunas, but was instead trying to get up (quotes via MMA Fighting):

“Someone said that I tapped, I never tapped,” Jedrzejczyk said. “Are you kidding me? It was probably that I was trying to stand up, but I didn’t. It was a piece of a second for me.

“I know it took a while – from the punch to the ground and pound when I had the turtle position, but for me it was a like a piece of a second. I know it was a few long seconds. It looks totally different than people think it is.”

Jedrzejczyk then doubled down on her claim that she did not tap out and explained she was probably trying to get to her feet:

“I didn’t know what was going on at that time probably. My body…I couldn’t get the right balance, you know? I didn’t tap, I never tapped and I didn’t tap.” 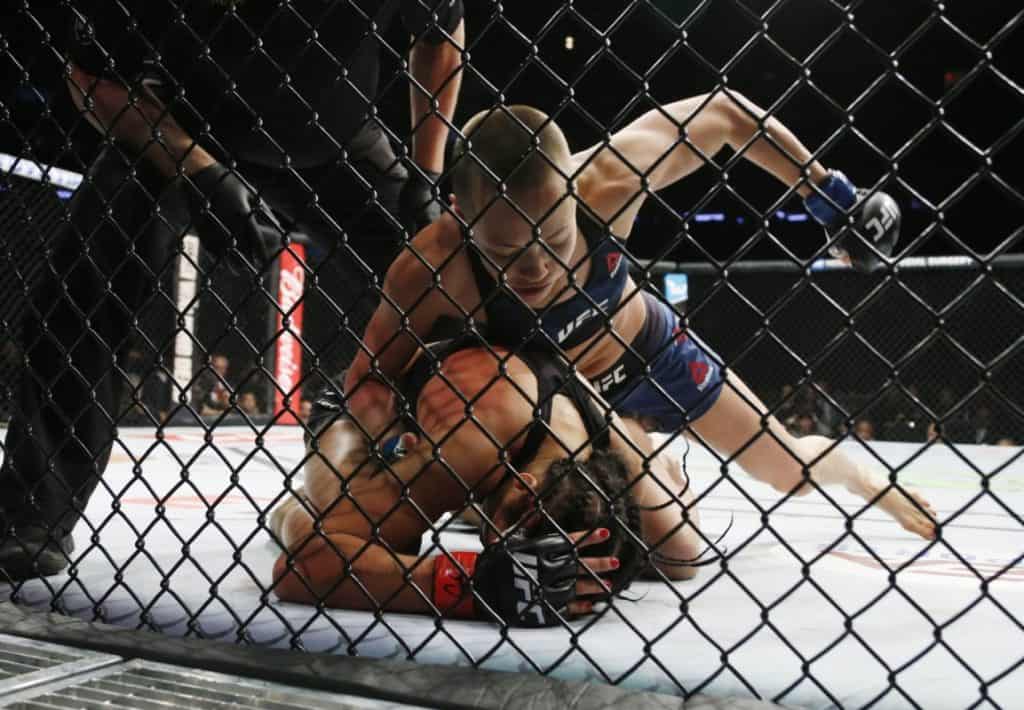 During the stoppage, Jedrzejczyk claimed that she felt as if she was standing next to the action watching it all unfold. She also claimed to feel slower in warm-ups before the fight got underway:

“I didn’t see the punch, the power of the punch. She didn’t hit hard, you know, but right to the point, I don’t know what happened.

“I just remember that during the warm-up I was feeling more slower than usually. I don’t know why, I must go to the fight week and figure it out.”

While she still doesn’t think that she tapped out, Jedrzejczyk agrees that it was the propped time to call the fight off:

“Of course, I was out, but I don’t know why,” she replied when asked if it was the right time to stop the action. Maybe there was something wrong with my brain or head, but I don’t know. I will figure out what happened because it’s unusual.

“I have almost 100 fights in my time in boxing and kickboxing. I had 15 fights in MMA and nothing ever happened before. It was the first time I got cut, someone knocked me down.”