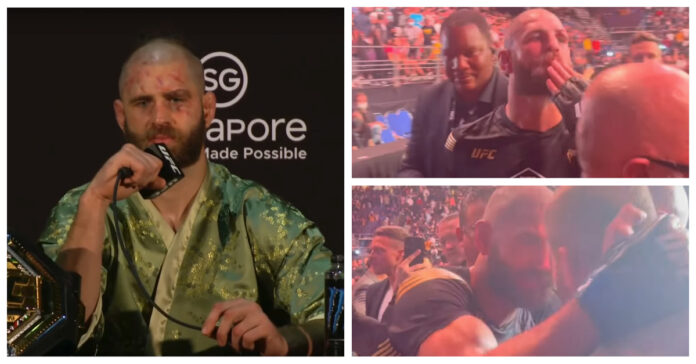 Jiri Prochazka shared the conversation he had with Jan Blachowicz backstage.

This past Saturday, Jiri Prochazka became the new undisputed UFC Light Heavyweight champion when he dethroned Glover Teixeira at UFC 275. He rose to the occasion in the most dramatic way possible with less than 30 seconds left on the clock. In a close-fought battle that Teixeira seemed to be on top of, Prochazka managed to secure a win in the fifth round by submission (rear-naked choke).

Prochazka went into the fourth and fifth rounds for the first time. Prior to the title fight, he had never had a bout go past round three for over a decade since starting his professional career in 2012.

Former 205-lbs title holder Jan Blachowicz was in attendance at Singapore Indoor Stadium in Kallang, Singapore. He was seen talking to the new king of the division after the fight for a shot at the gold.

In the post-fight press conference at UFC 275, Jiri Prochazka talked about the interaction he had with the top contender who’s likely to be his next opponent.

“It was little bit friendly, little bit aggressive,” Prochazka said. “After I said him yes, okay let’s go, you’re the next. He started to be aggressive like because he saw the cameras and all these things. I think he tried to flex a little bit.”

When a member of the press asked Prochazka if he blew Blachowicz a kiss based on the footage of the interaction online, ‘Denisa’ revealed the conversation he had with the former champion.

Do you think ‘BJP’ will be able to defend his belt against Blachowicz?