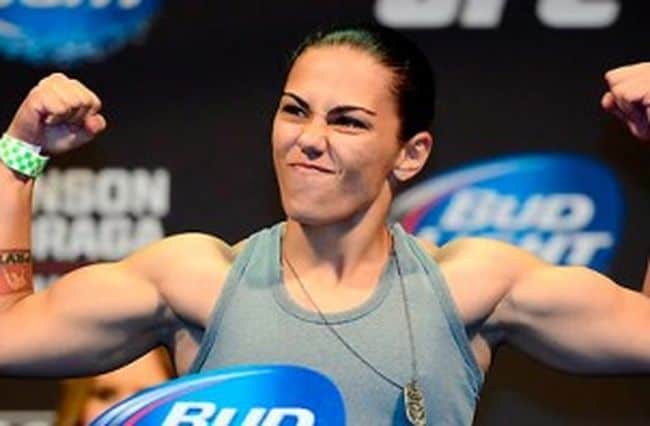 It was confirmed that The Ultimate Fighter (TUF) 18 alum Raquel Pennington would be fighting on September 5, 2015, but it wasn’t clear who her opponent would be.

She was originally scheduled to fight Leslie Smith, but Smith was forced out due to injury leading former title challenger Liz Carmouche to step in, but Carmouche also suffered an injury and pulled out of the bout. However, it has now been settled, as MMAJunkie has confirmed that Pennington will face off with Jessica Andrade.

This will actually be a rematch, as the two first met UFC 171 back in March 2014 with Andrade scoring a split-decision win. Since then, the Brazilian has won two out of her last three, most recently defeating Sarah Moras last month via decision.

Pennington on the other hand, has lost two out of her last three including the loss to Andrade. “Rocky” is coming off of a loss to former boxing world champion Holly Holm at last February’s UFC 184, and will look to get back to her winning ways come September.

UFC 191 will go down from the MGM Grand Garden Arena from Las Vegas, Nevada. The main event features a rematch for the 125-pound title, as dominant flyweight king Demetrious “Mighty Mouse” Johnson will put his title on the line against No. 1-contender John Dodson.

Top heavyweight contenders and former champions Andrei “The Pitbull” Arlovski, and Frank Mir will also do battle in the co-main event of the evening.

Check out the full lineup for UFC 191 below, and stay tuned to LowKickMMA as the event nears closer: