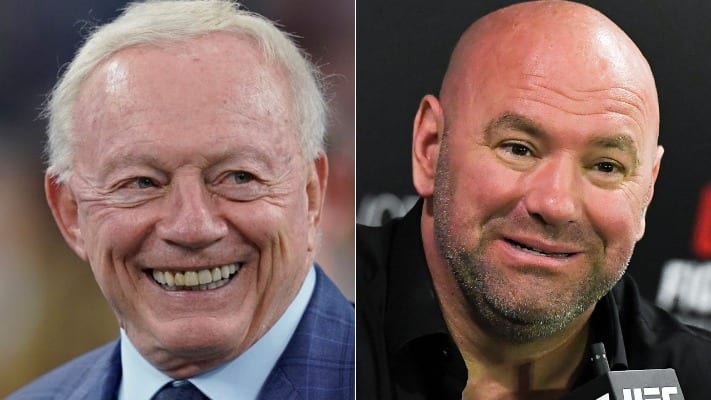 When accepting the fight against his former featherweight foe, McGregor also threw out the possibility of having the fight happen in the home of the Dallas Cowboys.

The UFC has been trying to get in to the state-of-the-art stadium since it opened, and it seems that Jones believes McGregor is just the guy to open their doors. In speaking with Dallas sports radio station 105.3 The Fan, Jones said of McGregor, “I’m a real admirer of his… I think he’s one of the neatest individuals I’ve ever met. Period.” (H/T TMZ Sports)

“He is special. It would be quite a day for AT&T Stadium to have him.”

McGregor was quick to welcome the news that Jones was willing to let his stadium play home to the UFC.

AT&T Stadium has to capacity to hold over 80,000 attendees. The Dallas Cowboys have been hosting up to 25,000 fans every home game while trying to uphold social distancing regulations. The sheer size of the stadium combined with Texas’ allowance on social gatherings made it seem like the perfect place for the UFC to finally invite fans back to their shows.

While Jones and McGregor may be excited to have Dallas host the unnamed event, there is one man who doesn’t seem hopeful it will happen: Dana White. The UFC president has been skeptical at best about holding an event in anything other than a full arena, and it doesn’t look like he’s willing to make an exception for Jones or McGregor (H/T MMA Mania).

“We’ve had a very good relationship with Jones for a long time and we’ve talked about Dallas Texas stadium for a while,” White said. ”I’m not going into any arena where we’re going to fill a quarter of the arena or half the arena. So when crowds are ready to come back, we’ll do crowds again.”

All that being said, the UFC head honcho did also hint that the results of the upcoming US election could play a factor in when fans would be allowed back, so it may to too soon to close the AT&T Stadium doors just yet. If White’s stance doesn’t change, then the UFC still have the APEX facility and Fight Island to choose from to host the January 23 event.

What do you think? Does these Jerry Jones comments mean McGregor-Poirier II will happen at the AT&T Stadium?