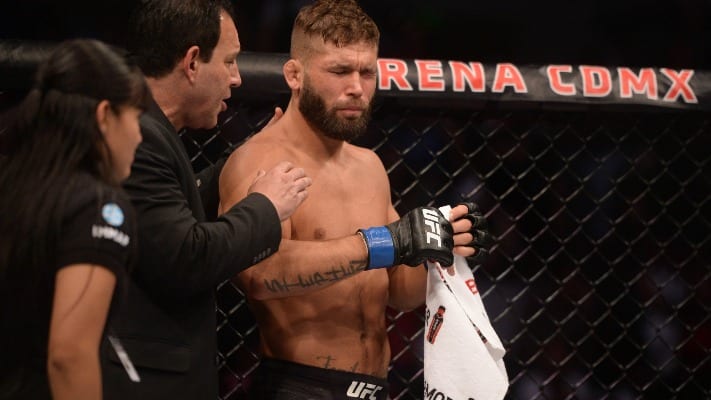 UFC veteran Jeremy “Lil Heathen” Stephens has been having a very difficult time lately. Having been suffering a 4-fight losing streak at featherweight to Jose Aldo, Zabit Magomedsharipov, Yair Rodriguez and Calvin Kattar, Stephens has moved up to 155lbs in an attempt to snap this streak.

Unfortunately, Mateusz Gamrot (19-1) had other ideas. The Polish native was able to get an early single leg takedown, and then immediately went to work looking for a submission. He managed to lock up a kimura, and Stephens was forced to tap after just 65 seconds.

As already mentioned, Stephens had been on a four-fight losing skid, with this now being the fifth, and also the third stoppage loss within those five losses. To make things even more bitter to swallow for Stephens, this loss to Gamrot was also the first ever submission loss of his extensive UFC career.

Following said loss, a naturally disappointed Stephens took to Twitter to issue the following apology to his cohort of followers:

“Feel I let a lot of people down tonight. Not my best performance, congrats to Gamrot and his team. Hope to get a quick turnaround to show the world once again what I’m made of.”

It’s interesting to see whether Stephens will elect to remain at 155lbs, or perhaps try his luck once again in the shark-infested waters of the featherweight division. Regardless of what weight he fights at next, it’s very hard to argue against the fact that Jeremy Stephens is now firmly in the last chance saloon.